Drew Residential Hall will be under construction during the 2021-22 school year, students and administration deal with the announcement. 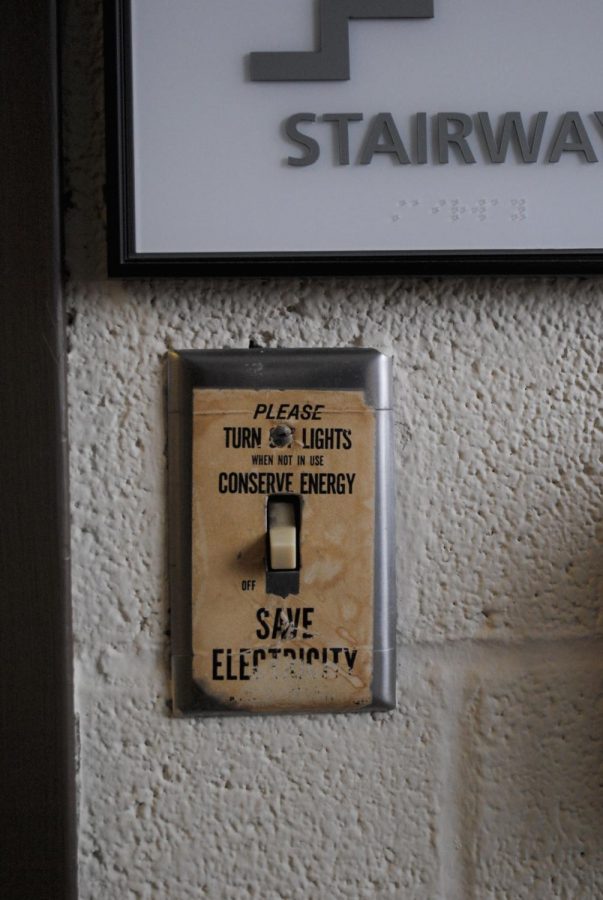 Cathryn Salis
Be it saving energy or saving money, the stickers on the light switches scattered around Drew are peeling and faded, indicative of an older efort. " />

Cathryn Salis
Be it saving energy or saving money, the stickers on the light switches scattered around Drew are peeling and faded, indicative of an older efort.

First year Abby Snider’s 2021-22 school year has been uprooted, once again. Her original housing plan had a wrench thrown in it when she received the email about Drew Hall being closed for renovations next year.

These renovations are slated to begin this summer and last until the summer of 2022, resulting in the hall being closed for the entire 2021-22 academic year.

Students who applied for next year’s housing in Drew Hall were notified of this closing on April 20, over a month after housing applications were submitted and reviewed.

“I guess I just wish they would have… given us some clear, like, heads up beforehand,” Snider said. “I think if they would have, like, even just included a little disclaimer like ‘hey, by the way there’s a chance that Drew is going to be closed next year,’ I definitely… wouldn’t have chosen the room I did. I would have gone and chosen a single in a different hall.”

Snider and other students in this situation received an email from Javier Gutierrez, the associate dean of students, which explained that the Office of Residential Life was officially notified that the residence hall would be offline for the upcoming year. The email also detailed some of the specific renovation plans and told students to contact Res Life to find new housing assignments.

“Each student has different needs,” Gutierrez wrote in an email. “That is why we work with each student or group of roommates rather than make a blanket housing assignment.”

Gutierrez also noted that students have the option to cancel their housing contract.

“When you sign up to live in a dorm hall, you kind of accept that it’s going to be a pretty old building and there’s going to be quirks about it,” Snider said.

This could be expected of a hall built in 1946 with a few additions and small renovations since. The bulk of Drew Hall’s infrastructure and plumbing is the original piping.

Renovations will most likely include a different heating system, and more gender-neutral bathrooms and laundry rooms on every floor. The exact renovations are not finalized, but they aim to make the building more accessible and improve infrastructure.

“We want to be doing more. The work that’s going on is part of the vision as we were choosing a project, you know, to be able to really have an impact, and an impact that students were committed to right alongside of all of us,” said Patti Kersten, vice president and dean of students.

The renovations have been approved both by the university and the board of trustees, which is necessary for these larger projects. Currently, conversations about design are underway with architects and engineers. Eventually, they will do bidding for contractor companies, and construction will begin shortly after that.

Contractors and construction have been impacted by the COVID-19 pandemic which caused supply chain issues, a factor to be considered as this project moves forward.

Though it may be a strenuous process until the fall of 2022, many facilities and staff members are excited for these renovations.

As for communication, Snider mentions how she is already stressed about the last few weeks of classes and finals, and the added stress of finding a new room did not help.

“Especially during the last two weeks of class, it’s like a pretty stressful time… for me it was just like another stressful thing on top of, like, already a stressful time,” Snider said.

Just an hour after Snider and other Drew hopefuls received the email from Res Life, all of Hamline students received another email from the President’s Office. This second message recognized the high levels of stress as it shared changes to grading options for the spring semester.

“Over the last few days, administration and faculty have been actively listening to student concerns about stress,” the email read. “We are fully committed to making your educational experience the best we possibly can, and that means looking out for the mental and emotional health of our community.”

Gutierrez explained that students were informed as soon as Res Life learned of the renovations so students had the most adequate time to work towards an alternative reassignment.

An email Snider received on the subject thanked her for her adaptability, but she felt it lacked sincerity.

“I feel like maybe this is me just being like COVID fatigued, and after hearing that so many times… part of me always feels a little bit like it’s not adaptability, because I kind of didn’t have a choice,” Snider said.

Despite her grievances, Snider, like other students, is glad the residence hall is being renovated.

“I think Drew is in need of repairs, so like I’m happy they’re doing it. I just wish they would have told us beforehand,” Snider said.