Hamline athlete soaring to the top

Senior Jobob Martin has big hopes for his final outdoor season as a Division Ⅲ athlete. 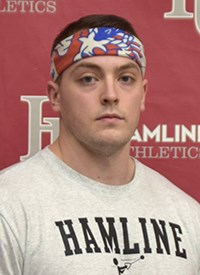 courtesy of Hamline Athletics
Senior Jobob Martin has been a key attribute to Hamline’s Track and Field success in throwing competitions for the entire time he’s been a part of. " />

courtesy of Hamline Athletics
Senior Jobob Martin has been a key attribute to Hamline’s Track and Field success in throwing competitions for the entire time he’s been a part of.

COVID-19 can not stop Senior thrower Jobob Martin from breaking records this season. An untraditional path to success has led Martin to the place he is at today. When seeing stats like Martin’s you would think that he has been perfecting his craft for most of his life. However, the athlete had a late start to the world of track and field.

“Senior year of high school is when I decided that track would be my main focus but I didn’t compete [during] my senior year, the year before I had just come off of a hip tear and I couldn’t do contact sports anymore so my dad told me I should go out for track because he still holds the discus record at his high school,” Martin said. “So I went out in my junior, did pretty good and then decided that that was it.”

In track and field, there are many accolades that athletes can acquire throughout the season. Many athletes work towards qualifying for the conference meet which takes place at the end of each season, from there the ones who excelled have the opportunity to go to nationals and work towards a title. Martin was on that path to nationals last spring but it, like many things, got canceled. So for Martin, this year means even more.

Martin has progressed exponentially since he started as a first year at Hamline.The biggest factor for Martin was figuring out what worked the best for his body, which turned out to be changing his whole diet.

“I don’t eat grains, I don’t eat processed sugar, I don’t drink caffeine. I eat things with only a handful of ingredients,” said Martin.

“I dropped 30 pounds of inflammation within two weeks, the last meet I competed at was outdoor conferences my sophomore year and I had just started the diet that week and I didn’t even make finals and now I haven’t lost to another division three opponent since,” Martin said.

Not only has Martin changed up his dietary habits he’s also made sacrifices in other areas as well. Martin balances school, sports, work, a wife and a new baby.

“Keeping a good relationship at home is something that I’m really proud of. I’m married and have a kid and juggling that has been difficult but it’s an amazing home to come home to,” Martin said.

Behind every great athlete, there is a team of support. There are many fellow Pipers who look to Martin for inspiration.

“His work ethic is unmatched, he’s highly motivated to do the best he can, he leads by example and pushes everyone to be their best every single day,” said Josh Blaschko, head coach of Men’s Track and Field.

With everything being different this year there are many things to adjust to.

“The biggest thing is everything is last minute, athletes use to be able to plan way farther in advance and with so much shared space [Martin] doesn’t lift at Hamline he uses the weight room at his home,” Devin Monson, director of Track and Field Operations, said.

These changes and uncertainties have not gotten in the way of Martin hitting a distance, 17.26 meters, that ranked him second nationally during the indoor season. There is not a lot of competition for Martin during his MIAC matches

“Winning isn’t the worry. He’s so far ahead of everyone in the conference,” said Monson.

Martin has to find external things to keep him going.

“[I am] finding weird things to keep me mad like checking national rankings motivates me,” Martin said.

At this point, Martin has received MIAC player of the week twice.

“It shows his hard work, he went from someone who wasn’t placing to making conference and then conference champ and now makingsp national meets, it’s nice to see recognition especially for all the hard work he’s put in,” Monson said.

Spring season is about to start for Martin and the track and field team and the fans are waiting to see how everything pans out.

“My overall goal for, while I was at Hamline, was to become an All American I thought it was something I could do but I have already achieved that so I thought ok what else can I do? So now my two goals coming in are to throw over eighteen meters and compete for a national title.”

Martin and Blaschko both have big hopes.

“It’s been a privilege for me to work with him and I’m going to be sad when he’s done this year and I’m excited to see what he does in this outdoor season,” Blaschko said.