The 2020 Election is here, and students are feeling drained, overwhelmed and anxious. 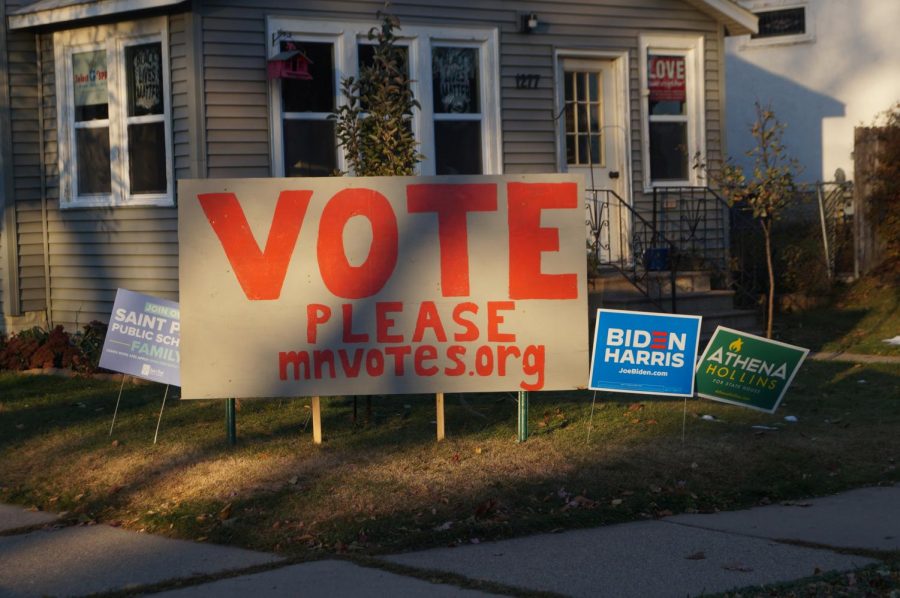 Cait Quinn
The Hamline-Midway neighborhood calls for American to go vote. The support for citizens to use their voice in the 2020 election is a theme that can be seen all across the country." />

Cait Quinn
The Hamline-Midway neighborhood calls for American to go vote. The support for citizens to use their voice in the 2020 election is a theme that can be seen all across the country.

As the election crawls to an end, students are anxiously awaiting the inevitable end of it all. The results and stability that comes with an election are widely anticipated.

“The election and news about the election has most definitely taken a toll on my mental health,” senior Christina Talberg said. “It’s very, very scary to think about what will happen if Trump wins. I’ve experienced a lot of anxiety about the election… At this point I kind of just want to rip the band-aid off.”

The Director of Counseling Services at Hamline University, Hussein Rajput, is not surprised that students are feeling overwhelmed by this election.

“Within the broader context of the COVID-19 pandemic, an economic downturn, protests for racial justice and a significant partisan political divide, the election is adding to stress levels that were already high for many college students,” Rajput said.

While Counseling Services are not hosting any programming or services specifically for students impacted by the election or its results, they still have availability and are seeing students virtually through their office.

Some students are getting involved in political dialogue and voting for the first time. For many, this is the first year they are eligible to actually cast a ballot in a presidential election.

“These past months leading up to the election have been the most I’ve talked politics [with] friends and family in my whole life. I think it’s important to talk to each other because we can learn more about who we’re voting into office,” said first-year student Luke Rimington.

For many, this election is less than inspiring yet still important. According to Chegg and College Pulse polls, 71 percent of college students supported Senator Bernie Sanders (I-Vt.) for the nomination compared to just 24 percent for Joe Biden in April of 2020. As the statistics showed, it was no well-kept secret that Joe Biden was not many college students’ first, or even second, choice for the Democratic nominee.

However, in February, Vice-President Biden’s polling among college students was just 6 percent, with Sen. Sanders at 58 percent and Senator Elizabeth Warren (D-Ma.) at 15 percent.

“The options that we have to vote for are kind of depressing, and my friends and I have discussed how we all sort of feel hopeless,” said first-year student DJ Jayee. “Some of my friends have even stated that they did not want to vote, that was how disheartened they were.”

However, Jayee also had a different opinion on the matter as well..

“This year voting is especially important because of the social and health state of our country. Undeniably there are things that need to be addressed and changed. I believe action starts with a ballot,.” Jayee said.

Not all students have been impacted in the same way by the Nov. 3 date.

“It hasn’t taken a huge toll on my mental health as, personally, I do not have much riding on this election (aside from the environment, which affects all of us),” Rimington said in an email response. “I do have many friends and some family who are either BIPOC or part of the LGBTQ+ community.  I’ve talked to them to really understand how the outcome of the election could affect them.”

While some students see Nov. 3 as an opportunity to elect a new president, the issues that impact individuals on a day-to-day basis go beyond the occupant of the White House.

“I think it is hard to say because, as a black woman, the same social issues are faced no matter who is in the white house,” Jayee said. “So, the gravity of the results for this specific election is debatable.”

Regardless of the election results, Hamline University and many of its offices have been preparing to support students based on anticipated need.

The Wesley Center will offer grab and go kits for “Journaling: the Days After” available on Nov. 4 and 5 in the Anderson Center.

The political science department will host a virtual post-elections panel with four faculty members on Thursday, Nov. 5 from 11:30 a.m. to 12:30 p.m. The Google Meet code is “hkv-gvqq-ram.”

The Center for Justice and Law will hold an election discussion with students on Nov. 5 as well and will be broadcasting the discussion on Instagram Live. Students can join by following their page @HUCJL.

Finally, the Diversity and Inclusion Steering Committee, Hamline University Student Conference and the Office of Inclusive Excellence will host an online campus-wide community conversation on Tuesday, Nov. 11 from 5-6:30 p.m..

Other offices, departments and clubs may also opt to host other pop-up events throughout the week and coming weeks, depending on what happens in the election, but campus officials say they are ready to support students however they can.