Netflix continues to prove that they are a genuine option for film with “The Devil All the Time”. 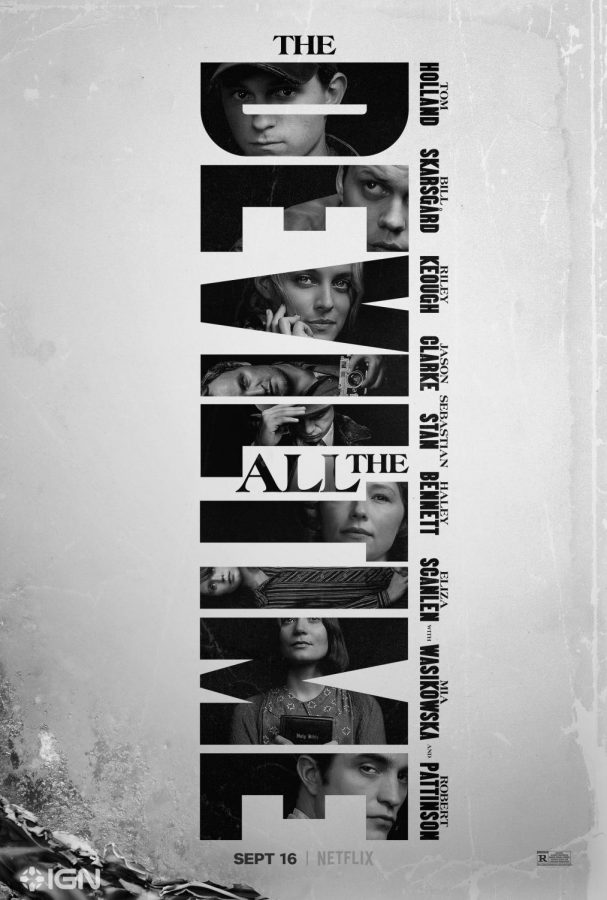 “He came every morning and evening to talk to God. It seemed to his son that his father fought the Devil all the time.”

From unapologetically grim subject matter to expressing controversial themes, “The Devil All the Time”, released Sept. 11th of 2020, challenges general audiences by presenting humanity at its worst. Because the film refuses to shy away from shockingly macabre imagery and disturbing themes, “The Devil All the Time” grabs you from its opening and never lets go, filling you with morbid curiosity. Though, once you’re numbed to the sheer dread on display, all that is left to be surprising is the fact that Netflix decided to throw money at a screenplay that will undoubtedly turn the masses away. Antonio Campos’ faithful adaptation of Donald Ray Pollock’s novel of the same name is a miserable viewing experience, but something that’s impossible to look away from.

“The Devil All the Time” is a tragic, grief-ridden story that follows a young man who’s surrounded by depravity. With incessant delusions of morality and normalcy, the traumatized boy is left inclined to imitate his father in fighting the devil all the time.

The potentially revolting experience stems from the film’s themes. “The Devil All the Time” depicts how religion can corrupt and erode morality through the abuse of power and a diluted understanding of a church’s teaching. Purposefully bleak, this distressing message will likely leave many with disparaging feelings, but the preached notion is worth hearing. Trauma can form and shape those who undergo it, and this concept is illustrated clearly through Pollock’s convoluted cast of characters. The corruption of religion and men is emitted into every crevice of the narrative; preachers using their influence to take advantage of women, wrathful parents spreading warped messages of Christianity to their children, sociopathic pimps placing more value on money than life and lawless police turning their blind eye. The word devil is uttered once but, as the film’s title suggests, its essence is present at all times.

The misanthropic narrative is elaborate but contrived. With branching stories that are intricately woven together, it’s genuinely impressive how effortlessly they fit together like a jigsaw puzzle. It is truly satisfying to watch sequences unfold from seemingly irrelevant story beats to earned conclusions. So, though the story is indisputably bloated and manufactured, the craftsmanship is commendable.

The majority of the film’s value is in its technical aspects. Every performance enhances immersion. Most notably is Robert Pattison who, after already proving his ability to create unique characters with his performances in 2017’s “Good Time” and 2019’s “The Lighthouse” , showcases his range by crafting a character who was entirely detached from anything he’s demonstrated before. Tom Holland is nearly unrecognizable in his embodiment of an emotionally traumatized young man. And Bill Skarsgard makes viewers forget that they are watching an actor. Lol Crawley’s cinematography is powerfully breathtaking. Nearly every frame in “The Devil All the Time” could be put in a museum. The dark and murky imagery feels dirty and creates a cold atmosphere of grime.

The sound design and musical composition by Saunder Jurriaans are praiseworthy –  the tense and foreboding audio alone can tell a story. With every directorial choice leaving your jaw dropped, one can only hope we see more from Antonio Campos.