Creativity has always been the lifeblood of drag. This year’s Drag Show showcased the artform’s ability to adapt. On Friday, Oct. 16, Spectrum brought a staple of queer nightlife and creativity to a campus desperate for entertainment. 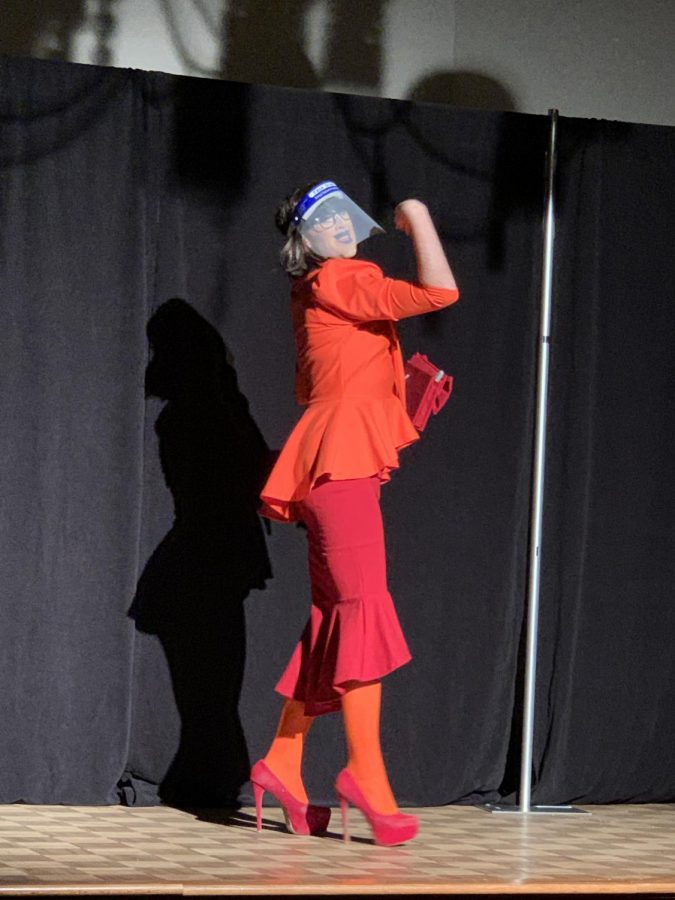 Courtesy of Spectrum
With Halloween right around the corner, TrishaSpectacle performs as Velma from Scooby Doo to capture the feeling of spookiness during the fall season." />

Courtesy of Spectrum
With Halloween right around the corner, TrishaSpectacle performs as Velma from Scooby Doo to capture the feeling of spookiness during the fall season.

Hamline’s Spectrum is a student organization working to build a queer community on campus. They’ve made a tradition of holding a drag show each year on campus. To accommodate health recommendations, it was held virtually this year. Performers either sent in videos or they had the option to be filmed on campus with a face shield. Even with no live audience, performers were still able to bring energetic performances that wowed viewers.

To enhance student engagement, Spectrum set up a discord, an instant messaging platform, chat for both students and performers to interact. Students were able to ask performers about their inspiration and costume design. It was a haven of positivity and love, with students gushing over the show.

This year, there was a wide representation of what drag is. Roughly half of the performers were Kings, a refreshing sight to see in a Queen dominated genre. One performer, DeanDMonic, was a drag persona of Dean from the show “Supernatural.” During the performance, audio clips of Dean were played to solidify the theme. One Queen, TrishaSpectacle, performed a version of Velma from “Scooby-Doo.” A timely choice!

SissyTops, a member of Queerdo, did a vocal performance and was able to use the virtual setting to her advantage. By bringing the dramatic elements of a spotlight and closeups, as well as giving a raining effect with the lighting, it made the virtual format feel less like compensating for a pandemic and more like evolving an artform. SissyTops and her group have been adapting to virtual platforms by putting on biweekly shows on Zoom, Facebook, and Instagram. SissyTops has started a podcast exploring media representation for fat and queer folks, too.

The show did have some hiccups here and there, especially when it came to audio quality, yet thanks to the hard work of the crew it went smoothly enough to bring a solid show.

The Venmos for each performer were displayed in the discord chat and on the main screen. To further support these artists during COVID-19, be sure to check out their Instagrams that are linked in Instagram posts made by Spectrum.

Queerdo performer, SissyTops, talked about the importance of providing representation and positive images of gender and queerness to those that need it.

“We’re in our thirties, we grew up with literally no representation on TV like we did not have. And if we were represented on TV, it was a joke,” SissyTops said.

SissyTops also mentioned how being involved in Spectrum’s event could possibly bring more awareness to queer culture at Hamline.

“Being a part of college events is something that’s really important and near and dear to my heart because I remember the very first drag queen I ever saw. I remember the first time I was completely blown away at a show,” SissyTops said. “So when it comes to stuff like this, it’s more about visibility and just having a good time and like meeting people who are excited to meet you. Like, that is quite enough for me out of an opportunity like this.”

Second years Emily Hildebrand and Ryan Geiss, organizers and members of Spectrum, also talked about the success in setting up the Hamline Virtual Drag Show.

“Having people who are engaged and it just being like a really fun and kind of community building event, I just feel like there was a lot of success in that area,” Hildebrand said.

Ryan Geiss stated that the diversity of having drag kings as well as drag queens was an unintentional benefit of the connections they had made.

“We just had connections with some drag kings through Damian, our secretary. And so we were able to get drag kings, which is, I think, amazing because I love seeing them perform just as much as queens,” Geiss said.