The Pipers beat Concordia University Moorhead to secure a spot in the MIAC playoffs, a first for this group of players and coaches. 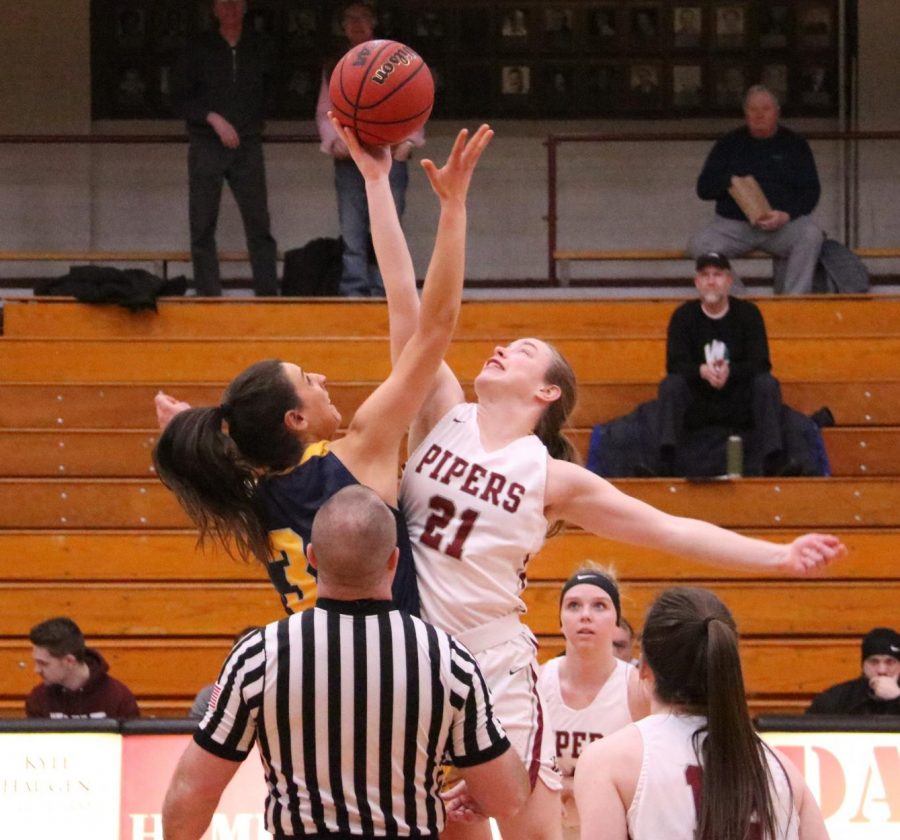 First-year Lydia Lecher goes up for the tip-off to start off the game against Concordia on Feb. 25.

The Hamline women’s basketball team triumphantly clinched a spot in the MIAC playoffs for the first time in seven years on Feb. 25. They also set their best record of conference play since 2013.

The Pipers fought hard in their last game of the regular season against Concordia Moorhead, who was also playing for a spot in playoffs. Although Hamline ultimately fell to Gustavus in the first round, the Pipers improved every year in the past three seasons; going from last in conference in the 2016-2017 season to finishing fifth this year in MIAC play.

The team and head coach, Alex Focke, agree that supporting and playing for each other and hard work were the reasons for the successful season.

“This team worked extremely hard and believed in each other,” Focke said. “It was fun to see all of their hard work pay off by making playoffs.”

Sophomore Chan’el Anderson-Manning is sure that the team will be back in playoffs next year but knows that it is still to be strived and worked for, stating that the team has implemented post-season workouts to help them achieve their goals.

“By knowing how far we have come and aware of how we did it, we are only determined to keep pushing ourselves to furthering the success of the program,” Anderson-Manning said. “Come next year, we are ready to dominate the league.”

Senior and captain Kaeli Stayer agreed that learning from their mistakes and making changes aided their victories. She also added that everyone was held accountable and had a part on the team whether it was on the court or the sidelines.

“Last year we ended up being one game out of playoffs and dropped a lot of close games, we learned from them and ended up winning a lot of close games this year which led to our success,” Stayer said. “We also had [first-years] step up in their roles. Everyone on our team had a role which helped our team be successful.”

First-year Lydia Lecher stepped up, earning a spot on the MIAC All-Conference Team and on the All-First-Year Team. Lecher had a breakout season and said that the seniors pushed her to be better.

The team will be losing five seniors to graduation, however, their leadership and skill have not gone unnoticed.

“They were a group that faced a lot of adversity throughout their four years and stayed committed to the program and the vision of where we wanted to go,” Focke said. “They had a tremendous impact on this program.”

The senior class won nine games total in their first-year and sophomore seasons, and 28 games during their junior and senior seasons.

Senior and captain Reilly Geistfeld also landed a spot on the MIAC All-Conference team, stating that competitiveness and wanting her team to succeed drove her to be the best she could be. After playing for four years at Hamline, Geistfeld, Stayer and the other seniors are confident in the group they are passing the baton to.

“I know that they can do so much better and take the program farther than we did,” Stayer said. “With the direction coach Focke will give, they will be tough to beat. I want to come back when they are seniors and see them hosting the MIAC championship game.”