A sickness we don’t talk about 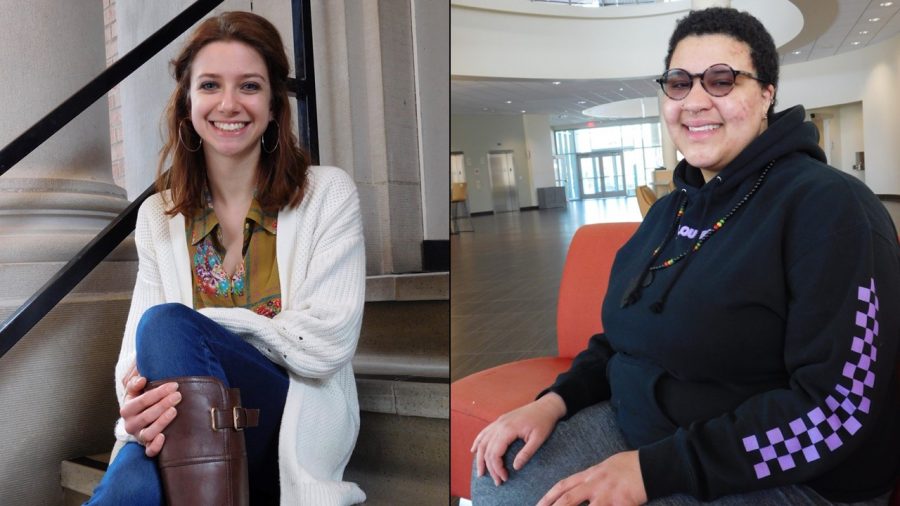 Approximately 30 million people in the United States will struggle with an eating disorder at some point in their life. For some, that struggle begins in college. Senior Sydney Holets (left) and junior K McClendon (right) have lived with and battled with different eating disorders while studying at Hamline. Seniors Myles Todman and Kiira Christopherson (not pictured) also experience unhealthy and disordered eating habits.

“You either have your eating disorder or you have your life” is a phrase that regularly runs through the minds of senior Sydney Holets and junior K McClendon. They are roommates and are both actively battling eating disorders.

Holets actively had anorexia since she was in seventh grade. After being in recovery for two years, she reverted back to the same old habits last February.

McClendon is actively dealing with other specified feeding or eating disorders (OSFED), which has symptoms of restriction and binge eating.

While conversation around eating disorders is not as common as for other mental illnesses, research by the National Eating Disorders Association (NEDA) indicates approximately 30 million people will struggle with an eating disorder in their lifetime in the US. Some of those are college students.

Campus resources to help those who are struggling are not always able to meet these needs.

In a Collegiate Survey Project published by NEDA in 2013, almost 90% of campus staff implementing mental health services said screenings, therapy and counseling were important to prevention and treatment.

However, only 22.4% of those campuses offer screenings year-round. Only 59% offer therapy and counseling services with eating disorder specialties, indicating a gap between need and available resources.

Hamline’s Counseling and Health Services is a general care provider. They will “help people with taking a look at some of those [eating disorder] patterns or some of those behaviors,” said Hussein Rajput, director of Counseling Services.

Those at greater risk are connected to Twin Cities resources that specialize in eating disorder treatment, such as the Emily Program and Melrose Center.

“The standard of care or best practice is to work with a team of folks,” Rajput said.

McClendon has their own team made up of a dietitian, doctor, therapist and psychiatrist. These types of teams are necessary to ensure that the patient is being fully supported. Holets has been in eating disorder treatment at the Emily Program in St. Paul since June.

“Folks who kind of fit that profile of being high achieving, perfectionistic, maybe somewhat self critical, can be at greater risk for eating disorders,” Rajput said.

Like other mental illnesses, eating disorders can affect anyone.

“There is a stigma that fat girls can’t have an eating disorder,” said senior Kiira Christopherson.

Christopherson, who experiences disordered eating habits but has not been diagnosed with a specific condition, is not alone in feeling this way.

“Having a restrictive eating disorder in a larger body is a whole different thing,” McClendon said. “There’s a lot of invalidation that goes into that for somebody who has a larger body, like you feel like somebody is not going to take you seriously because of your larger body.”

Today’s diet culture plays a role in this stigma.

“Diet culture tries to sell you the cure for being fat,” McClendon said. “They even talk about it like it’s a sickness by calling it an epidemic.”

Eating disorders are often unintentionally perpetuated by the people closest to you.

“Friends, family or well meaning individuals will say ‘Oh, you look so good. Have you lost weight?’” Rajput said. “Sometimes that really contributes to an internal struggle for the individual who might know that some of the behaviors they’re engaging in aren’t the healthiest.”

This was the case for senior Myles Todman who was affected by his family.

“I wouldn’t say that I overate while growing up, but my dad didn’t like that I ate my meals so close together. So now I eat my meals four hours or more apart,” Todman said.

Now Todman finds himself falling in line with the way his brothers eat.

“I found out that they intermittently fast, so they only allow themselves to eat eight hours out of the day,” Todman said. “I found that out, and I started doing it as well.”

Within those eight hours, Todman only eats two meals and does not eat past 10 p.m. He does not have a diagnosed eating disorder, but considers his disordered eating habits problematic.

“I realized I don’t want to eat three meals a day,” Todman said. “Unless I tell people, they don’t know that I only eat two meals a day. Or sometimes not even dinner. It’s not a healthy relationship with food, but I wouldn’t know what category it fits in.”

Societal expectations and the way in which we consume media also plays a role.

“It’s been more or less like the obsession with having to have a certain body image,” Christopherson said. “And it’s stemming from the idea that fat girls can’t eat a certain way.”

With resources sometimes hard to find and utilize, students are in particularly vulnerable positions for choosing to cope rather than seek treatment. Holets struggled with this because of how long she had lived with her condition.

Christopherson still struggles to overcome rationalizing and normalizing of their eating habits, which makes them feel their situation is not that bad.

“I can maneuver my way around it so I’m still functional, which is also scary,” Christopherson said. “I see myself as fine, but another person could see me as not. AKA my therapist.”

According to NEDA’s survey of college services for eating disorders, only 17.9% offer monthly or weekly education around eating disorders. Most other campuses offer programming only once per semester, if at all. This silence can keep students from talking about what they are dealing with or even knowing they may have a problem.

Some people can’t imagine a version of themselves without an eating disorder.

Those struggling often develop ways of rationalizing and normalizing this behavior.

“I can maneuver my way around it so I’m still functional, which is also scary,” Christopherson said. “I see myself as fine, but another person could see me as not. AKA my therapist.”

McClendon believes recovery is possible, but it takes time.

“When you’re suffering from an eating disorder, you’re sick,” McClendon said. “I would consider myself still sick. But I do believe that I will heal. A lot of people say you’ll struggle with your eating disorder forever. And maybe that’s true, but I think eventually that will just look like me knowing how to take care of myself.”

Through various forms of writing, Mcclendon and Holets have found their ways of taking care of themselves.

“I started writing a gratitude list every single day and it changed my life,” said Holets. “Gratitude helped push me in a more positive direction of even though things are hard, things are also okay.”

McClendon noted the public’s misunderstood notion that eating disorders or disordered eating only affects a small population of people.

“Any way you are denying your body exactly what it wants when it wants it, that is disordered eating,” McClendon said.