St. Paul mayor Melvin Carter is up for re-election. He advocates for civic engagement during a recent talk at Hamline. 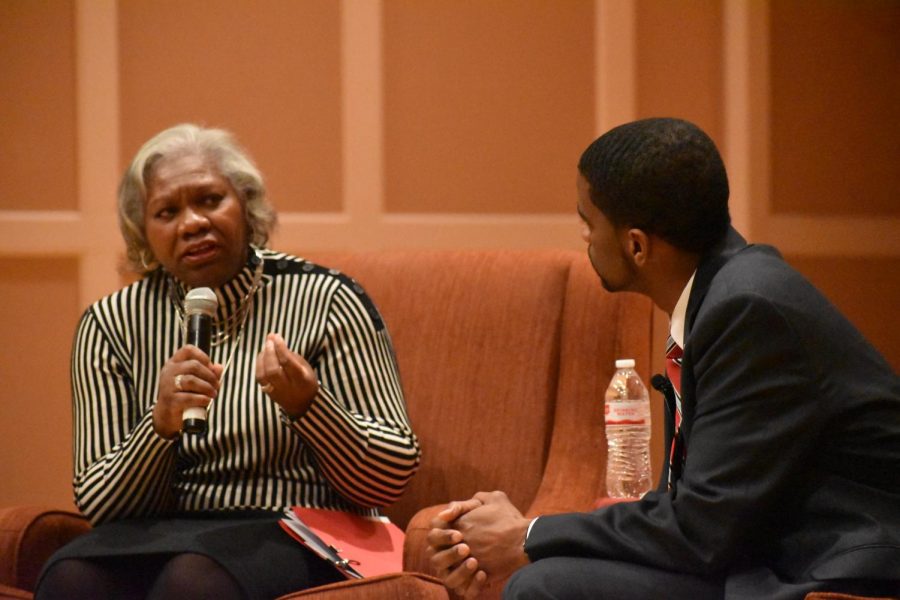 Hamline President Dr. Fayneese Miller reads questions asked by students, asking St. Paul mayor Melvin Carter about his views regarding the environment, the growth of St. Paul and the true nature of liberty during an event on Feb. 12.

Speaking in Sundin Music Hall, Carter touched on a variety of topics, providing details about achievements thus far and his goals for the future.

President Miller opened the event by highlighting some key accomplishments of Mayor Carter’s administration. These included raising the minimum wage, a reestablished affordable housing trust fund, expanded refugee and immigrant support resources and the launching of College Bound Saint Paul, a program that will provide children born in St. Paul a college savings account with a $50 seed deposit.

“If you look at his record over the last two years, he has been doing all the good he can for all of St. Paul, including Hamline University,” Miller said.

Many of Carter’s responses to the topics discussed centered around the importance of strengthening community unity and increasing civic involvement.

“The way we build the budget for the city, we do it by engaging people in the community,” Carter said. “Our goal for St. Paul is to make sure everybody knows that they are owners of the city… that people are able to participate in the decision-making process.”

This community-centric attitude seemed to resonate with senior Kalu Abosi, who was in attendance.

“I think it’s really dope having someone from my neighborhood, my community, being in this position of power,” Abosi said. “It’s really important to invite college students and people all throughout the community to get more engaged in things like this.”

Carter did not mince words when discussing the issue of climate change.

“It’s really harsh and it’s really bleak, especially in the context of the federal government that’s pulled out of the Paris Climate Accords, which is a terrible, horrible thing that doesn’t make me proud,” he said.

However, Carter reaffirmed that he is committed to pursuing the climate goals and commitments outlined in the accords.

Some of the ways St. Paul is addressing the issue of sustainability is a Climate Action Resilience Plan that aims to reduce emissions and transportation, as well as a $5 million loan fund toward making energy-efficient improvements to buildings and city infrastructure that Carter says will end up saving taxpayers $80,000 per year in reduced energy costs.

Carter concluded by discussing his approach to public safety, and the problem with following a model that focuses on dealing with a crime after it happens.

“Public safety should start way before that,” Carter Said. “If it’s about making us safer, it has to start with how we reduce the likelihood that something terrible will happen in our community in the first place… that means families have to be stable, people have to feel hopeful about their future.”

La-Tasha Parks, a Fine Arts faculty assistant who attended the event, had a positive response to Carter’s comments.

“It was good to hear about his experience growing up here, and where this community started and where it’s going in the future,” Parks said. “The insight in seeing how far we can go from where we’ve been is beneficial and can help people to know what we can do to help and assist our community.”