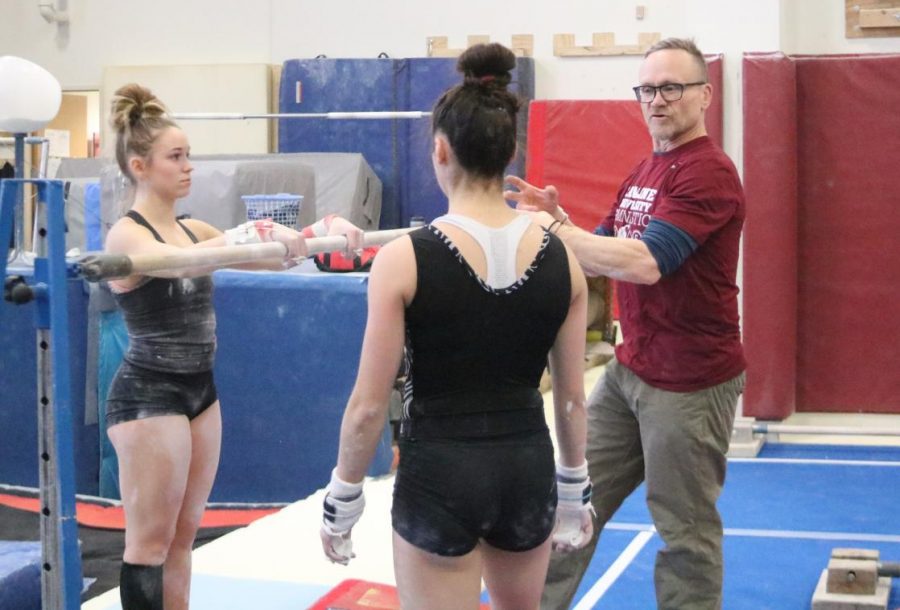 Coach Doug Byrnes talks with sophmores Savannah Tafolla and Katie Viles before starting to work on some uneven bars elements.

Hamline Gymnastics coach Doug Byrnes was only supposed to work Saturdays. On many occasions, he felt pressured to quit. Yet Byrnes found his home at Hamline over the last two decades.

Having started gymnastics at Hamline in 1989 as a spotter on weekends, coach Byrnes took a full time role here in 1996, moving to the head coach position in the 1999-2000 season.

Currently, Byrnes is in the middle of his 20th season as head coach and his time here has had an impact on many people.

“He creates a more fun and carefree atmosphere, where in club it was more cut throat,”  said sophomore Katie Kalland. “He coaches us as people first.”

Byrnes started his gymnastics career in seventh grade through his middle school and high school. Before starting the sport, Byrnes had played football, basketball and baseball.

“I was always the smallest guy hands down,” Byrnes said. While the size difference from his teammates in other sports may have been a disadvantage, in gymnastics it was not.

After his time in high school, Byrnes went to the University of Minnesota where he studied engineering. After a year of competing on the gymnastics team, he found he was not in the right place.

“Truth be told I didn’t have the heart, I wasn’t emotionally strong enough to be a college athlete,” Byrnes said. This compounded with a busy school schedule, work and a desire to play more rec sports led to him quitting.

Shortly after quitting, Byrnes found an ad for a coaching position at St. Anthony Park High School. Ever since taking that job he has been Coach Byrnes.

“I didn’t even really like coaching,” Byrnes said. “I felt ineffective, I didn’t really know what I was doing. I started thinking it was a character flaw like there was something wrong with me”.

Yet Coach Byrnes stuck with it.

“I felt like if I quit I’d have failed. I’d already quit the sport as an athlete, I didn’t want to quit as a coach,” Byrnes said. “I was still convinced deep down that I could figure it out.”

In 1989 Hamline Gymnastics founder Mary Jane Olson asked Coach Byrnes if he wanted to work at Hamline. Byrnes declined. After Olson asked him four more times, Byrnes agreed to work Saturdays as a spotter for the team.

When Olson left Hamline in 1996, Byrnes took an assistant position.

In 1999 Byrnes had taken a pause coaching at Hamline, working full time as an engineer. Only a few weeks before the gymnastics season started, Byrnes received another phone call. Hamline’s new head coach had left and they were looking for someone new.

Again, Byrnes didn’t play to stick around, just long enough for Hamline to find another head coach. Then the team won nationals.

“I thought, hell, I’ll do it for one more year,” Byrnes said. Which turned into another and another and then two decades as head coach.

Sophomore gymnast Katie Kalland first met Byrnes at a gymnastics camp when she was ten years old. Since coming to Hamline, she has gotten to work with him a lot more.

Byrnes’ care and love for the sport echoes in his gymnasts.

“I love gymnastics more than I ever have,” sophomore Katie Viles said. “If you fall it’s not the end of the world, mistakes only make you better.”

With a more fun environment for meets, gymnasts are able to enjoy the sport more.

Thanks to his time as an engineer, Byrnes is able to make complex moves simple.

“When you break these big buildings down into small components you learn how to kinda communicate in the minutiae,” Byrnes said.

This had an influence on how Byrnes coaches.

“I try to coach in a way that is logical, communicates effectively, and it’s repeatable,” Byrnes said.

This method of coaching has helped his gymnasts learn difficult maneuvers in a safe and effective manner.

“He loves his protocols,” Kalland said. “He breaks it down piece by piece.”

Coach Byrnes’ hands-on, caring coaching practices has led his team to nationals multiple times. This success was recognized in 2018 when Byrnes was awarded the National Collegiate Gymnastics Association’s Coach of the Year award. Alongside this, Byrnes has won multiple Wisconsin Intercollegiate Athletics Conference coach of the year awards during his career at Hamline.

Despite a long journey of self doubt and coming close quitting multiple times, Coach Byrnes has worked hard for a very long time to make Hamline gymnastics what it is and in doing so it has helped him too.

“I wanna be a better version of me because of this,” Byrnes said.