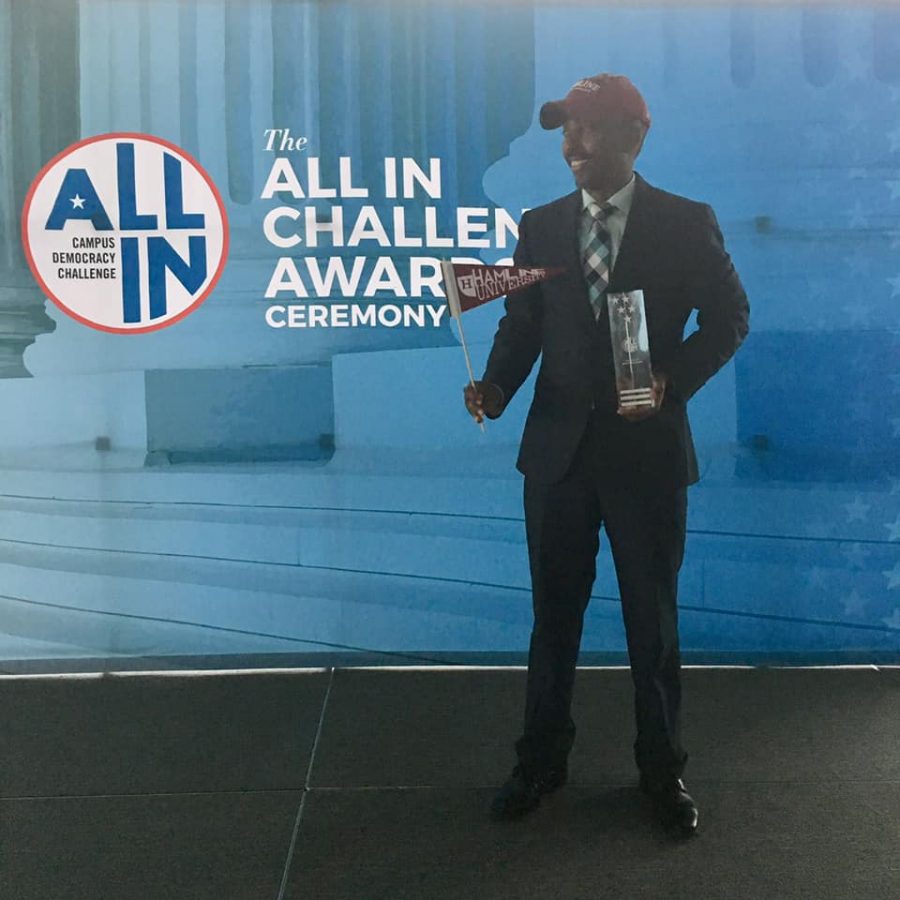 All In photo caption (can be used for either 01 or 02, only post one of these online): Coordinator of Social Justice Initiatives Nur Mood accepted a platinum seal from the ALL IN Campus Democracy Challenge in Washington, D.C. on Nov. 12. 2019.

A year after the 2018 midterm elections, Hamline is being recognized for its voter engagement efforts and record-high rates of student turnout.

The ALL IN Campus Democracy Challenge, a nonpartisan organization that seeks to promote civic involvement at colleges, awarded Hamline its Platinum Seal for a voter turnout of 63.3% of undergraduate students, the highest rate in the nation at a private four-year institution.

“My partners across the university stepped up and together we registered our students and helped them get to the right polling place,” said Coordinator of Social Justice Initiatives Nur Mood, who spearheaded voter outreach efforts on campus through the Wesley Center’s Hamline Votes program. “It’s something that I didn’t do by myself, it’s something that collectively we did as Hamline community members.”

Initiatives to promote student turnout in 2018 included tabling for registration in Anderson Center and free transportation for Pipers to and from the nearest polling station on Election Day. Senior Liam Davis Temple, the former HUSC president, knocked on doors throughout residential halls to register students to vote and coordinated arrangements for Minnesota politicians such as Keith Ellison, Ilhan Omar and Steve Simon to campaign on campus.

“There [were] tons of people we registered to vote [from door-knocking in the dorms]. We would bring the forms and [students] would fill them out,” Davis Temple said. “That played a big role in terms of people getting registered here at Hamline.”

Now, with less than a year to go until the next presidential election, campus leaders are beginning to brainstorm ideas for how to raise turnout even further for 2020. In 2016, 69% of Pipers voted, which in a presidential year merited a Silver Seal.

Mood is currently in the process of assembling a working group of faculty and staff to lead Hamline Votes initiatives for the coming election. Along with these group members and a student worker, he hopes to visit every class on campus to promote voter registration and hand out pledge cards. Additionally, he will be urging professors against scheduling exams or major due dates on Election Day.

“Politicians haven’t historically advocated for young people,” Davis Temple said. “If there’s someone who speaks to issues that college students face… I think that could probably activate the campus a lot more.”

Davis Temple said that he perceived more political activity at Hamline than when he first came to campus in 2016. He offered the revival of the College Democrats, which had been dormant for several years, and the recent establishment of a chapter of conservative group Turning Point USA as evidence for growing enthusiasm.

“It was a sad stat to see that only 106 million people voted in the 2016 elections, when there are 340 million people in the United States,” said junior Elliott Engen, president of Hamline Turning Point USA. He expressed interest in collaborating with Davis Temple on bipartisan outreach efforts. “We need those numbers up. Whatever it may be, let’s get people to the voting booth.”