Painting for a cause

Beginning painting students create a collaborative mural to further awareness of fires in the Amazon rainforest. 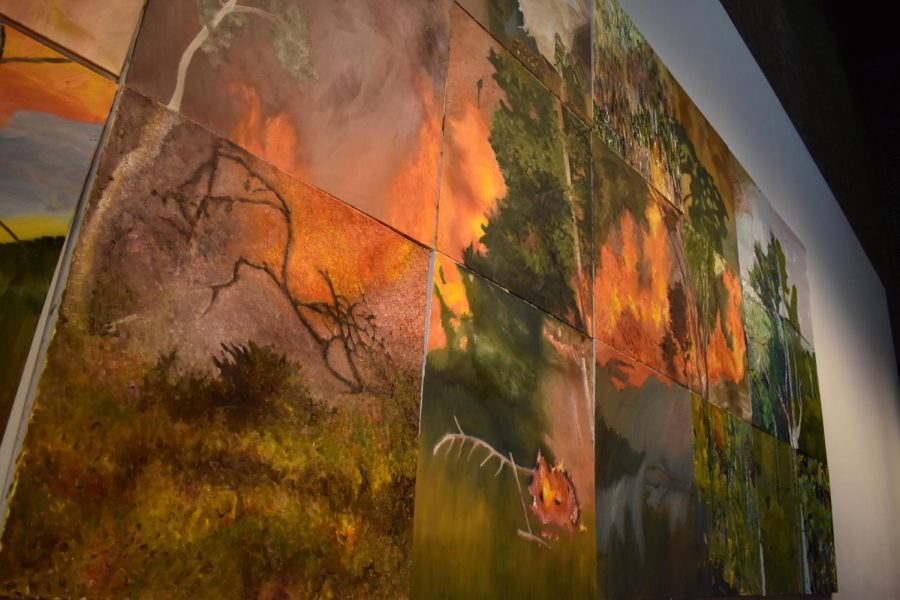 A closer look at the fires among the trees. The mural was constructed to give more public attention to the burning of the Amazon Rainforest, and its significance to the Earth.

The mural is the result of work by Professor Andrew Wykes’ Beginning Painting class. The class chose to do a mural of the Amazon ablaze not long after the environmental disaster made headlines this past summer. The class looked at several photographs of the rainforest as inspiration for their painting.

“There had to be an image that would be graphic, that showed the trees, the fire and also parts of the forest that are still unharmed,” Wykes said.

To help the students gain a deeper understanding of the mural’s subject matter, biology professor Bonnie Ploger visited the class to talk about the importance of the Amazon rainforest and the reasons behind the flames. The cross-curricular approach combined science and art.

“I was thinking in terms of getting [the students] to think about the visual aspects of what a rainforest is like, how it differs from a forest here [in Minnesota, but also] the tremendous value of [the Amazon],” Ploger said.

Ploger covered many aspects of the rainforest, from its endangered biodiversity to how the high demand for beef is causing the rainforests to be logged and burned for pasture. She emphasized how the fires were deliberately started due to pressures for increasing agricultural space, yet pointed out that the nutrients needed for farming were ironically in the forest’s trees, not its soil.

“[Ploger’s presentation] made us all the more passionate about the painting as a whole and what we were trying to achieve,” first-year Miranda Kieren said. “When Andrew teaches, we usually focus on the actual paint and the space, color and depth of a painting rather than the actual subject matter. With this painting, we had to do both, because the message conveyed through the paint was just as important as the paint itself.”

Kieren valued how she could create a work that was just as effective as a standalone piece as it was a part of a greater mural.

“It was a physical metaphor for how different people can come together for a cause, and work together but still remain individuals as well,” Kieren said.

The mural was constructed by combining multiple canvases, each painted individually by the students, in order to piece together a bigger picture.

“I wanted the students to have their own individual way of painting displayed in each segment they did. I wanted [the mural] to be disjointed,” Wykes said.

Wykes aimed to increase awareness of the rainforest fires with the mural, especially since the news surrounding the Amazon fires has dialled down the last few months.

“Awareness is the first step [towards solving this issue],” Wykes said. “I just wish more of the Hamline community would cross the street and look at it.”

For Professor Ploger, the mural symbolizes a cry for both help and hope.

“[I hope] it could fuel some activist activity on the part of people seeing it and inspire other people to find out more, not just about the protection of the Amazon, but threatened habitats that are right in Minnesota, and how we can live in a more sustainable way.”