The ‘Other Daughters’ of Greek mythology

Compelling and complex, Hamline Theatre Department’s performance of Iphigenia and Other Daughters is an interesting experience. 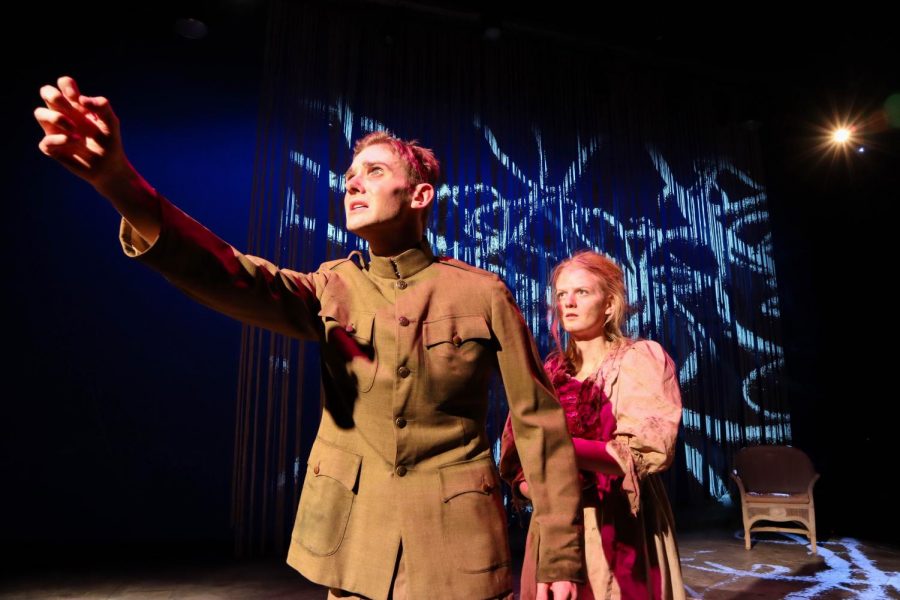 Orestes, played by senior Nick Hill in Hamline Theatre’s fall production of Iphigenia and Other Daughters, reflects on the hardship he has endured while his sister Electra, played by junior Ellie Dun, listens.

Hamline University recently put on a performance of the cerebral play known to retell the fall of House Atreus, a Greek tragedy called Iphigenia and Other Daughters. This play digs deep into the history of the Trojan War and the struggle between House Atreus’ members in a more modern setting. Mixing in contemporary sensibilities with dialogue that evokes eras of the past.

It follows a dramatic conflict within a family after its patriarch is slain. The play focuses on the children of Clytemnestra and Agamemnon, who suffer at the hands of an unforgiving world and a cruel mother. The performance showed a lot of rawness, as the actors would regularly physically interact with props and fellow cast members in a much more intimate way than most other performances.

It draws an interesting conclusion from within its story; that the cycle of revenge and hatred can only be stopped from within. The play has a very minimal set with only a few props, but is able to turn this into a strength by focusing solely on the dialogue between characters. Iphigenia and Other Daughters is full of philosophy and moral ambiguity.

The acting within the show is phenomenal, and the strongest aspect of the play is just how well the characters react to each other. Each actor is given enough dialogue and actions to give the audience key insight into how their characters work, and it’s only heightened by the incredible use of lighting and staging in order to highlight the important parts. The way characters move around stage when they monologue, the way they stare at each other during confrontations––these are all great playwriting techniques that the students on stage bring to life with enthusiasm and passion.

Iphigenia and Other Daughters may have a plot that is hard to grasp at first, but as it unfolds the audience is only given more to proverbially chew on when it comes to the story. The Hamline Theatre Department truly utilized more out of less and spun a complicated story into gold.

There are more upcoming showings of the play from Nov. 21 through 23, all at Hamline’s Anne Simley Theatre.