The Wesley Center’s movement for LGBTQ rights within United Methodism unveils its goals. 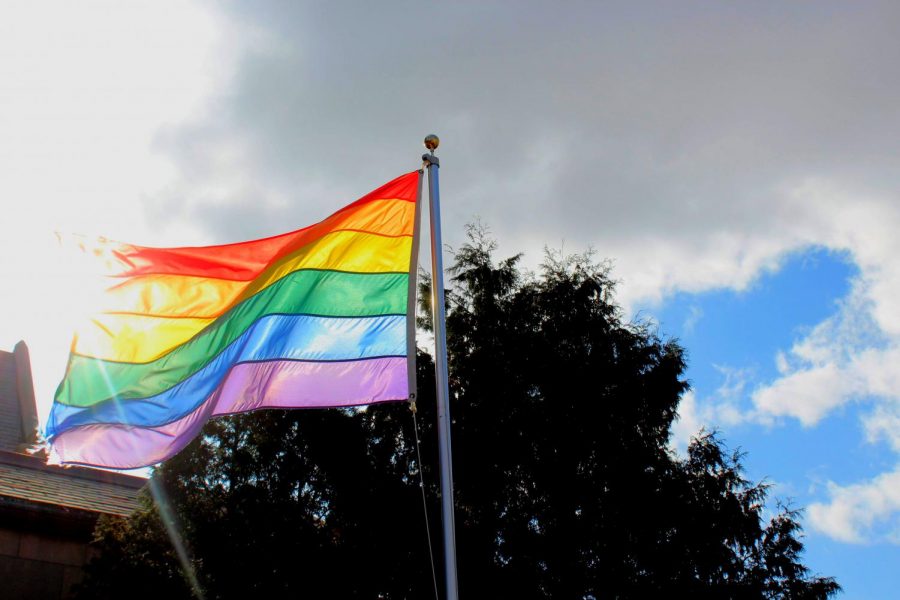 Last Easter weekend, as fundamentalist protesters descended on Hewitt sidewalk, Chaplain and Wesley Center director Nancy Victorin-Vangerud saw an opportunity to counteract their message of damnation. Along with senior KT Cahow, she stood opposite the protesters and unveiled the banner for the Wesley Center’s newly-minted Love Boldly campaign.

“We came out and we gave out [Love Boldly] pins,” Victorin-Vangerud said. “We’ve been using ‘Love Boldly’ as our mission statement, about who the Wesley Center thinks Hamline should be advocates for.”

Victorin-Vangerud coined the phrasing, and the campaign, after the global United Methodist Church (UMC) voted in February to affirm and strengthen denominational prohibitions against LGBTQ clergy and same-sex weddings. Most U.S. church conferences, including Minnesota’s annual conference, opposed this decision.

“The communications department of [the Minnesota] annual conference decided they would make grants, for up to $1000 [per] church, or organization, to invest in communicating a different message,” Victorin-Vangerud said.

After the Wesley Center applied for and received a grant, the Love Boldly campaign was born. Communications assistant Rebecka Green designed a logo featuring the words ‘Love Boldly’ in rainbow typeface against a white background. Much of the money was spent on promotions bearing this logo, such as banners, social media ads and pins.

“We ran out of [pins] within weeks and ordered more, and had to keep ordering more,” Green said. “I think [Love Boldly is] something people are recognizing on campus now.”

As of September, Love Boldly also has a student leader spreading the message. First-year Emily Hilderbrand came to Hamline with a well-versed background in advocating for LGBTQ equality in the UMC. She has heightened Love Boldly’s online presence, planned monthly meetings and aims to formally align Hamline with the Reconciling Movement, the UMC’s pro-LGBTQ arm.

“We’re working on making Hamline University a Reconciling university, which is a Methodist-related institution that welcomes and celebrates all gender identities, sexual orientations and gender expressions,” Hilderbrand said.

At Love Boldly’s first meeting on Nov. 7, she elaborated on how to fulfill this goal.

“We’re looking to do two rounds of voting, mostly because we want students and staff on campus to be informed about what the movement is,” Hilderbrand said. “We’re going to have two Love Boldly meetings before we do a student vote, and right now I’m looking at putting it through a HUSC general assembly… before we do a Board of Trustees vote.”

In order for Reconciling status to be ratified, the Board of Trustees must vote 75% in favor. Victorin-Vangerud was optimistic that they would, as board makeup has changed since 2012 when trustees voted to remain neutral on a proposed anti-gay marriage amendment to Minnesota’s constitution that ultimately failed at the ballot box.

“That’s… part of the reason we’re doing a student and staff vote first, to [say] this is what the student body and the staff body of Hamline is supporting, this is how many people have voted,” Hilderbrand said.

Love Boldly meets next at 4 p.m. on Dec. 4, in Anderson 305. The discussion topics will be allyship and combating harmful theology.

“If we don’t stand against that, we’re complicit,” Hilderbrand said.