Hamline graduate is back on stage (management)

Recent Hamline graduate gets back into stage management in Phoenix Theatre’s most recent production. 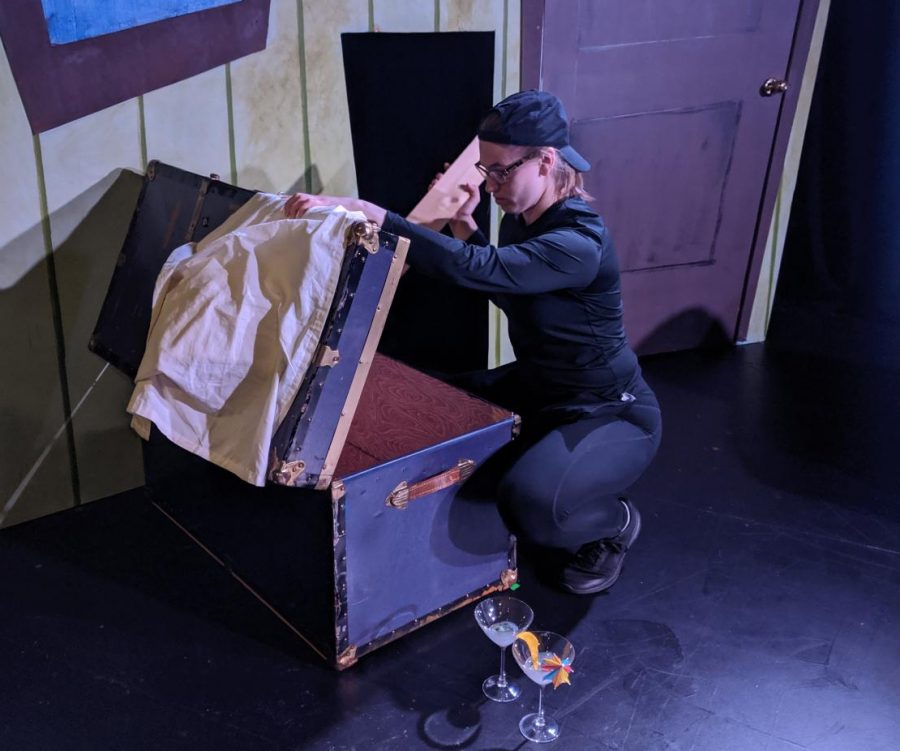 Emily “Remi” Remmey resets props before a performance of “Night of the Living Dead! The Musical," produced by Minneapolis Musical Theatre.

Emily “Remi” Remmey, a ‘19 Hamline grad, is the stage manager for the Minneapolis Musical Theatre’s recent showing of “Night of the Living Dead!” a musical comedy satire of the movie of the same name.

This was Remmey’s first musical theatre production for a Minneapolis theatre.

“I became involved with the production this summer, in July, after Joe Hendren (the producer) reached out and asked if I was available,” Remmey said in an email interview.

Remmey’s career within theater did not just start after graduation. She was involved with production management, props construction, light design and the box office for multiple shows at Hamline’s theatre department. Remmey also worked as a stage manager for the 2017 production of “Sweet Charity” and the 2018 production of “She Kills Monsters.”

“I first became involved with theatre in general as a small child and have been attending classes and being in productions since,” Remmey said. “I used to be an actor, but after suffering a severe concussion I could no longer memorize the lines. I switched over to the tech side!”

“Night of the Living Dead!” trades in a veil of seriousness for a more overt musical spoof on the feature film by screenwriters John Russo and George Romero. Less attention is paid to the technical aspects of practical effects and drama in order to make room for references, jokes and bizarre concepts meant to revel in the absurdity of the production.

Overall, the show relies on a jubilant and energetic display from the cast and crew. The lights constantly shift color and tone, giving the show a particularly offbeat sense of energy.

“I like the show because it exists to be funny and entertaining, and we do a great job bringing people into the space and making them laugh,” Remmey said. “The show doesn’t have a big ‘lesson to learn,’ and it doesn’t try to pretend it does. We just want to entertain.”

This was Remmey’s first time as a stage manager since graduation. The change of pace was one of the challenges she encountered.

“The most exciting part of the show was doing tech in four days—Hamline’s theatre does it in two weeks,” Remmey said. “It was a learning curve!”

Another change was learning to take charge as the stage manager. In theatre, once tech starts working on the show, the stage manager directs rehearsals. Remmey said she started out by looking to the director of the show for what they wanted to do but quickly learned that was her role as stage manager.

“The second to last night, the production coordinator pulled me aside and was like, ‘dude! Run the hard tech sections! Just take charge!’” Remmey said. “I was like, ‘wait—I can do that? Are you sure?’”

Remmey said she is not currently signed up to do any other shows, but is open to the idea.

“I am learning more and more about a stage manager’s role every time I am involved in a show,” Remmey said. “I love stage managing and would love to do it in the future!”

Overall, “Night of the Living Dead! The Musical” is both highly entertaining and technically sound. For such a small performance, it is wonderful to see a minimalistic take on the satirical side of musicals.