Real life is on the stage in Penumbra’s ‘Pipeline’ 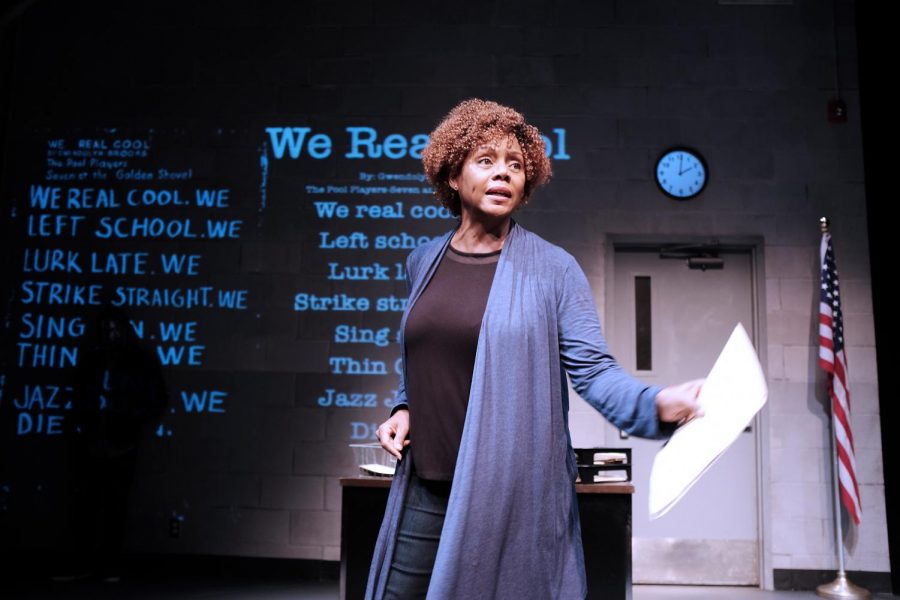 Erika LaVonn plays Nya in Penumbra’s production of ‘Pipeline,’ a mother caught between American racism and wanting a good education for her son.

“We real cool,” the words of Gwendolyn Brooks’ poem of the same name echoed throughout the theater, the audience hanging on to each and every word as it continued. It is not the first time it has been said during the performance of the Pipeline, currently being performed at Penumbra Theater, but each time it takes a deeper meaning, and the ending line still hits hard, “We die soon.”

As the play tackles complex themes and difficult topics, “we real cool” is returned to again and again as a framework, conveying the fears and motivations of the characters. The poem’s use perfectly encapsulates the challenging themes found in the nuanced and complicated play.

Directed by Lou Bellamy, the founder of Penumbra, Pipeline follows the story of Nya and Omari, an African-American mother and son, as they struggle to connect with each other and try to navigate the racial and societal barriers present in the educational system they find themselves in.

“We witness a mother and a son, striving to reach one another through the painful matrix of race and racism that separates their experiences,” said Sarah Bellamy, the artistic director of Pipeline and wife of Lou Bellamy.

As the characters try to find their way through their environments, Nya is faced with her fears for the future of her son. In an intricate look at the experience of parenting, she has to confront whether or not she has made the choices that were truly best for him.

At the beginning of the play Omari attends a prestigious majority-white boarding school, where he faces microaggressions and tokenization as a result of his race. He struggles to be understood both by his peers and teachers, and ultimately acts out. This leads to even further consequences as his actions are subject to harsher punishment due to the color of his skin.

The problems Omari faces are not unique to the world of the play, a point that is explicitly brought to the audience’s attention by real world parallels shown in tandem with the play. One of these parallels that is particularly striking is the video of a black student being slammed to the ground by a school police officer which made national news in 2015.

The use of these examples is to serve as a reminder that these problems exist outside of the fiction presented, and that attention needs to be paid to these issues – especially locally.

“Pipeline is an urgent call for attention to one of the starkest disparities in Minnesota: the health, wellbeing and success of our black and brown schoolchildren,” Sarah Bellamy said. “Penumbra is producing this play to raise awareness and prompt interdistrict discussion.”

With Pipeline, Penumbra continues its tradition of strong social commentary that it has provided since its creation in 1974. Pipeline was written by Dominique Morisseau, a playwright from Detroit, and published in 2017.

“This production of Pipeline is an example of the ways in which we continue to use are to provide relevant comment on existential community priority,” Lou Bellamy said.  “It’s my sincerest hope that our efforts will entertain, enlighten and move you to action.”