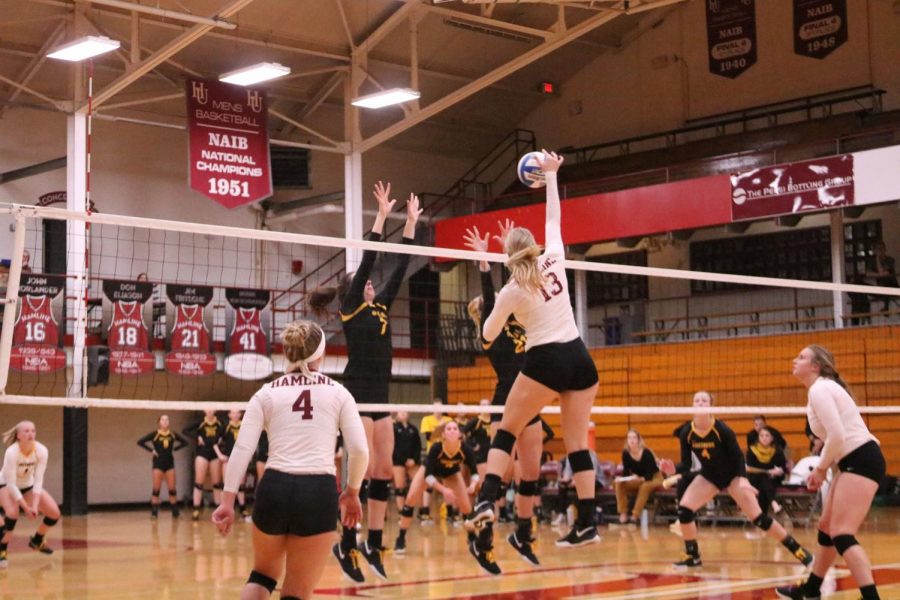 Junior Madison Hurrle tries to hit the ball past two Gustavus Adolphus blockers during a game on Oct. 5.

With a ranking of 4-5 in the season, Hamline was looking to take that recorded evening win against the winning team from Carleton. The game did not start well for Hamline as they let two points past in the first ten minutes, at the seven and eight-minute marks. However, Hamline would not let the first half slip by without a response of their own as Hamline junior Ashlee Olson struck back with a score from fifteen yards out at the 26-minute mark. Hamline was relying on their new keeper, sophomore Lauren Sicora, who was playing her first home game. Sicora did a great job in blocking twenty of the twenty-two shots on goal that day and letting no shots in during the second half. However, the pipers were unable to produce enough shots on the goal in return in order to even the score. The game ended 1-2 and Hamline’s record dropped to 4-6, with 1-4 in the MIAC.

The season has been going well for Hamline Volleyball so far. With a record of 10-5, the team hoped to push that even further in their game against Concordia. The Pipers took an early lead in the first set, forcing Concordia to play catchup, as the set stretched on the teams exchanged leads, coming to the wire with the teams tied at 23-23 near the end. Two quick points from Concordia gave them the first set. However, Hamline was not ready to give up quite yet, taking the following three sets by a larger margin Hamline got the win they wanted. Junior Madison Hurrle had the most kills with a total of 16, while junior Megan Rubbelke maintained her lead in the number of assists with 48 in the match.

Men’s Cross-Country vs. Blugold meet
On October 4, 446 different runners from 29 different teams met at the Blugold meet. Hamline took fifteenth in the meet, beating out St. Olaf by just ten points. This placement was thanks to four scoring runners from the Pipers. The best time in the 8k was senior Fernando Benitez, who finished with a time of 26:05.1. Shortly after was junior Frank Gustafson who finished 67th with a time of 26:13.9. Hamline junior Ben Roen barely missed the top 100, placing 105th, still a scoring run for Hamline. Finishing at near the end of the top 150 was Aric Brodie, who came in 149th. Rounding Out Hamline’s scoring runners was First Year Nehemiah who finished in 178th.

Women’s Cross-Country vs. Blugold meet
As 342 runners met in Eau Claire Wis. Hamline was there to show what they could do. The most impressive showing of the day came from junior Helen Dolan, who showed everyone how good she really is taking 6th with a time of just 22:27.9. Shortly after her was sophomore Alexandra Maddux who placed 30th with a time of 23:21. Sophomore Emma Mader found her way into 135th and first-year Miranda Ekleberry took 173rd. The last of Hamline’s scoring runs came from first-year Emily Danzl who finished 189th. At the end of the day, Hamline walked away with 11th place.

Men’s Soccer vs. Concordia 2-4 L
Coming off of a win against Bethel, the Men’s Soccer team wanted to start the month of October with another win. Their opponent for this goal was Concordia. The game started slow, neither team scored in the first half, each only getting one shot on goal the entire time. However when the second half rolled around the game kicked into gear. Concordia was the first to score, at 47:04. Just twenty seconds later Hamline responded with a goal from sophomore Lay Wah. Soon after Hamline took the lead. Sophomore Logan Weller found the net and put Hamline on top. This took a turn for the worse as Hamline let Concordia score three more times before the game ended, giving up their lead, and losing 2-4. Their next game will be in Duluth as Hamline travels to play St.Scholastica.

Football vs. St.Olaf 2- 29 L
The night’s score for Hamline’s latest football game did not reflect how well Hamline played in their game against St.Olaf. The night was all about the passing a game for the Pipers as they put up a total of 268 passing yards. However, this didn’t translate to points as Hamline was unable to get the ball into the endzone. Hamline’s points that night came from the defense who forced a 36-yard safety with just 5 minutes left to play, however, this was not enough to beat the Undefeated St.Olaf, who had a total of 29 points at that time. Hamline now stands at a record of 1-4 without a win in the conference. The team’s next game will be Homecoming against Carleton before the team goes back on the road.

Volleyball vs.Gustavus Adolphus 1-3 L
A set in Volleyball typically goes to 25 points, however, if the margin by which the leading team is winning is 1 point then the set continues until a team takes a 2 point lead. The first set between Hamline had a score of 33-31. The teams were neck and neck that night. The first set went to Hamline as the two teams fought tooth and nail. The second set was close as well, yet Hamline ended up falling 23-25. After this, however, Hamline wasn’t able to muster and gave up the final two sets. The team now stands at a record of 11-6. They are set to face off against Augsburg next. However the game being away may not be too much of a disadvantage, The Pipers hold a positive record in games in both neutral territory and in their opponent’s home courts.