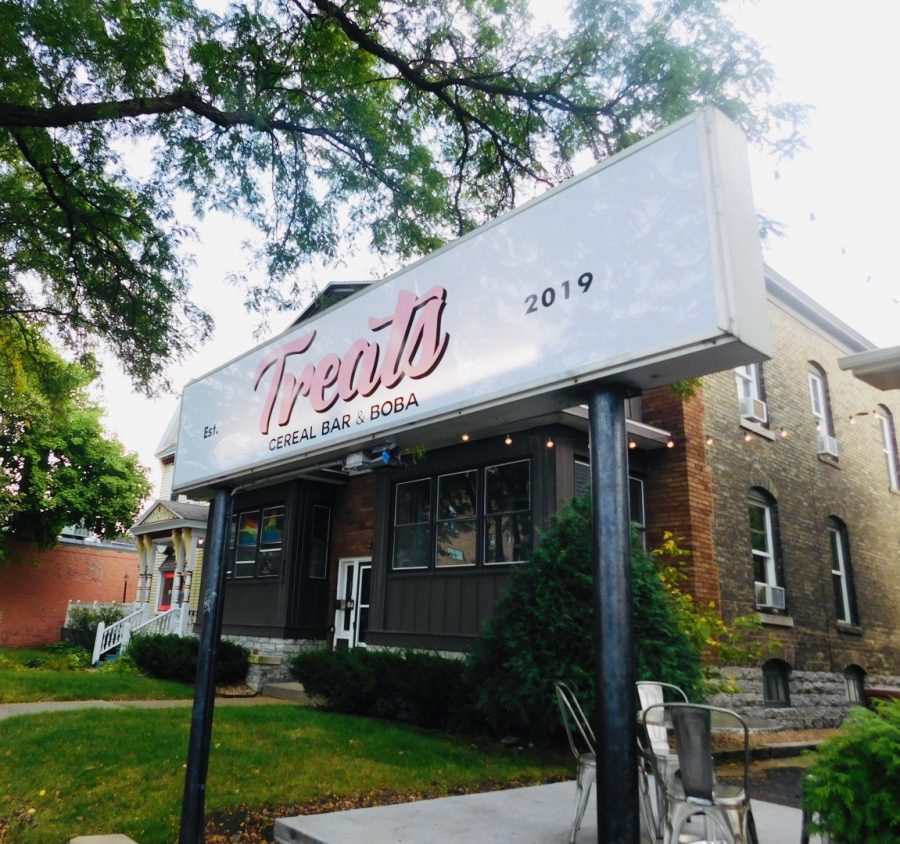 With its pristine white tiling, neon signage, cereal mascot mural and creative ice cream creations, Treats Cereal Bar and Boba is the perfect destination to snap an Instagram pic. In fact, if you search #treatsmn you can find plenty of people who have done just that.

Opening just three months ago, Treats features and an extensive menu of cereal based ice cream and milkshakes, as well as a variety of bubble tea options.

To make the ice cream and milkshakes, the cereal is ground up into a fine powder and added to the base ice cream. Customers can create their concoction or choose from one of their recipes, like Super Crunch Brothers which is made of Cap’n Crunch, Rice Krispie Treats and Cinnamon Toast Crunch. Customers can also choose between five different flavors (and colors) of cones,

The Social Media friendly appearance is not the only thing Treats has going for it. The ice cream is incredible, it tastes just as good as I hoped it would. I chose to get an Apple Craze milkshake, with Apple Jacks, Cinnamon Toast Crunch and Cap’n crunch. I had feared that so much sugary cereal would make the drink too sweet, but they have worked out the right amount of cereal to keep that from happening.

Even better than the ice cream is the environment, thanks to friendly employees and good music the store is very welcoming. While I was there a young boy came into the store and was 28 cents short, instead of turning him away they took the money out of the tip jar.

While there, I spoke to Minh Dinh, who co-owns the cereal bar with his sister Trisha Seng. He had been working alongside his employees, enthusiastically greeting every person that walked through the door.

As children Dinh and Seng’s parents owned a restaurant in St. Paul as well, so the two had always been around food, and knew they wanted to work with it someday.

As fall rolls around, Treats will be adding new items to their menu to match the dropping temperature. The new items include hot drinks like coffee and hot chocolate as well as cereal infused waffles.

While the ice cream might seem a little pricey, with the ice cream starting at $6.50 and the tea at $3.75, it is well worth the cost for the quality and atmosphere you get. Treats is a sweet store that fits in perfectly with the other businesses of Grand Ave, and could be the perfect stop if you are looking for something sweet (and maybe a cute pic too).