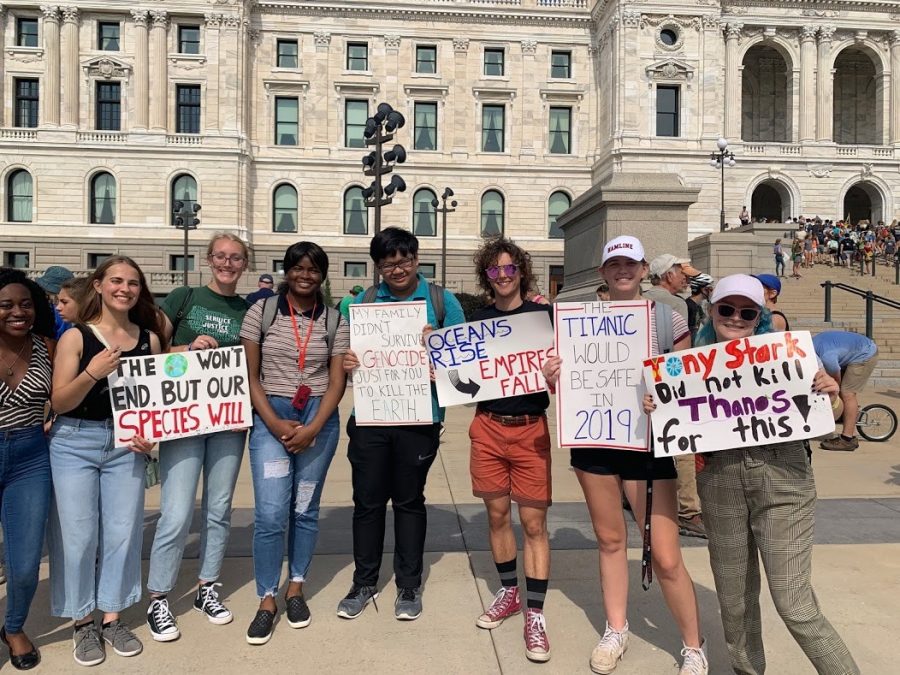 On Friday, Sept. 20, several groups of Hamline students and faculty left campus to participate in the Global Climate Strike. They congregated outside of the Minnesota State Capitol as part of what would become a worldwide strike to urge local and international leaders to take legislative action against the threat of climate change.

As someone who helped to mobilize Hamline’s role in the strike by starting dialogues with students and professors about protesting and logistics, I had the opportunity to speak with many students both before and after the event about their perspectives. Several students in the days preceding the strike shared a similar sentiment: ‘I don’t want to miss class, and it won’t really make a difference if one more person goes anyways.’

While I can admire their dedication to academics, it’s important to carefully weigh your values before deciding not to attend such an event.

As Professor Valentine Cadieux, Director of Environmental Studies and Sustainability at Hamline put it: “You miss a lot if you miss a day of class, but so much of what we’re organizing is about how to equip you for the future, and this was a really important gathering which was so rich and so full of things than you can’t get in that one day [of class].”

Maybe by attending a protest, you’ll miss out on learning Kant’s Categorical Imperative, but you’ll just be practicing it instead.

In the wake of both the climate strike and the recent United Nations Climate Summit, issues regarding the environment have been weighing heavily on the minds of many students. Considering all of the noise and razzle-dazzle surrounding the issue in traditional media coverage and social media, it can be exceptionally difficult to get a good sense of what is going on.

One aspect of the climate crisis that I think is woefully overlooked is how intrinsically tied to social justice it is. Fortunately, it was a central theme of the Climate Strike.

“When it comes to issues of climate,” first-year Fatima Raye Menawa said, “it seems like people of color, indigenous people and low-income people are the most at risk.”

For examples of this, one need not look farther than the Flint water crisis, where race and social status factored heavily into the lack of adequate protection from lead poisoning. From black and brown communities displaced and further marginalized by climate-related events, to subsistence farmers being devastated by drought, social equity and climate change are inextricably linked.

In the words of sophomore Rachel Eva: “I think it’s important to keep in mind that sustainability isn’t just about being vegan, recycling and not using plastic straws—its about people, and its important to keep at the very forefront how climate change disproportionately affects communities of color. The fact that [the speeches] were centered around that at this event was really important.”

It’s true, the speeches largely centered around the topic of social justice, and subsequently, so have conversations around campus. Perhaps it’s felicitous, considering Hamline’s admirable focus on diversity, but I think this change is part of a larger paradigm shift. Ever since the beginning of the Dakota Access Pipeline protests, I have noticed increasing coverage of how environmental crises have affected alienated and underprivileged peoples both in school and in the media.

“To see so many people seeing [social justice] as central was really validating,” Cadieux said, “and it also made it feel like the life’s work I’m engaged in is working… that the conversation has changed in that direction.”

No matter who I talked to, everyone got something out of the strike. So next time you have the opportunity to attend a strike or protest, take it, even if we do all die from climate change anyways.

Maybe someday, when you’re lying on your post-apocalyptic deathbed, dying from dehydration, you can tell your grandchildren how you skipped a lecture on Pearson’s equation to valiantly fight for the future of your planet.