Bringing theater to the classroom 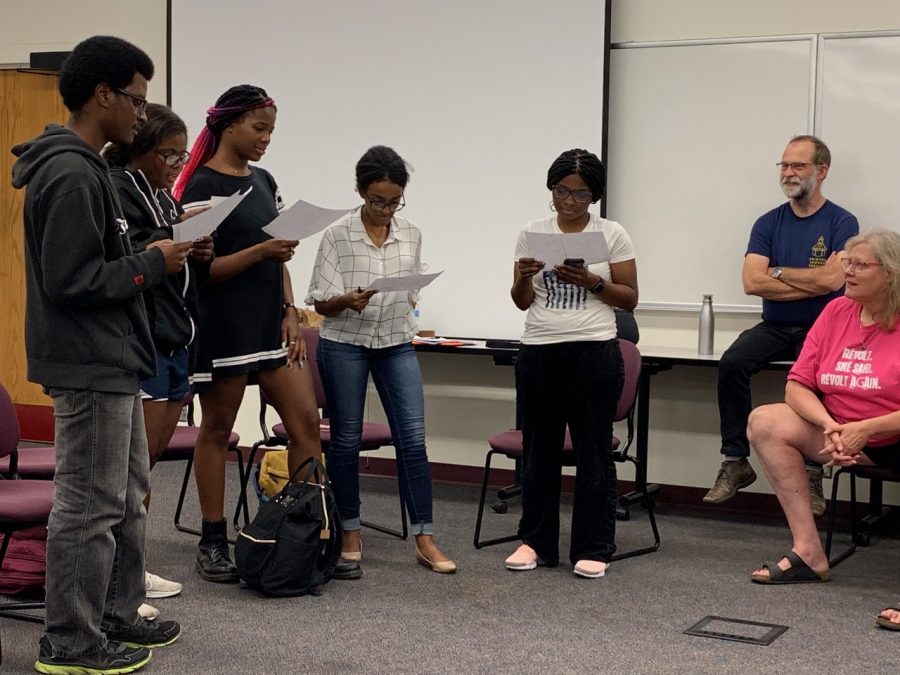 Lucas Erickson has wondered for a long time why so few young people go to see theater. He created On Stage, a St. Paul-based theater outreach group, to bring youth and theater closer together.

“While ticket prices play a big role, I also found that young people don’t find theater relevant to their lives, so why would they go?” Erickson said.

On Stage is dedicated to bringing theater into classrooms, where actors introduce scenes from socially relevant plays and invite students into a conversation on their themes. Erickson and On Stage recently visited Hamline to discuss heavy hitting topics featured in two upcoming plays: “Here We Go” and “Escaped Alone.”

Both by British playwright Caryl Churchill, the plays expressly explore uncomfortable topics through the lens of theater.

“Escaped Alone” depicts a surreal and apocalyptic future, viewing the world through the eyes of four aging women sharing stories in a garden. Their conversation ranges from their grandchildren and hobbies to the effects of the vast environmental catastrophe surrounding them. Living in a world surrounded by climate destruction, the state of their surroundings has become a common point of casual discussion.

“Here We Go,” on the other hand, takes a hard look at aging and death. Opening on a funeral, the show focuses on the difficult and at times dehumanizing process of growing older. The play encourages the audience to go outside of their comfort zone as it continues with its social commentary.

Erickson expressed his goal of challenging students to not be afraid of exploring uncomfortable topics, asking one class to share with their partners what they were most afraid of.

“They were trying to put us outside our comfort zone,” sophomore Shelby Wood said.

After reading through scenes from the plays, Erickson and his team welcomed the students to talk about themes, and discuss questions the audience was being asked. This lead to an in-depth discussion on topics such as climate change, mortality and the meaning of age.

“I think it’s cool how everyone can glean a different experience,” junior Helen Pfeifer said. “I think that more people should be thinking about these things.”

When asked, both Wood and Pfeifer agreed that the topics the plays touched on were relevant to young people.

“Theater is a very different entertainment experience than people our age are used to,” Pfeifer said.

Wood was also inspired to go and attend the performances.

“I definitely want to go see the plays,” Wood said.

This is the response that Erickson and On Stage hope to cultivate through their program, encouraging students to go into the world of theater and see what they can learn. He explained that he wanted to leave the students with two lasting questions: “When are you responsible for the world you live in?” and “What are you going to do about it?”

“Here We Go” and “Escaped Alone” are being performed at Frank Theatre until Sept. 29. For tickets and showtimes visit franktheatre.org/events/.