The sculpture guild put Hamline on the map by being a stop in this year’s Saint Paul Art Crawl. 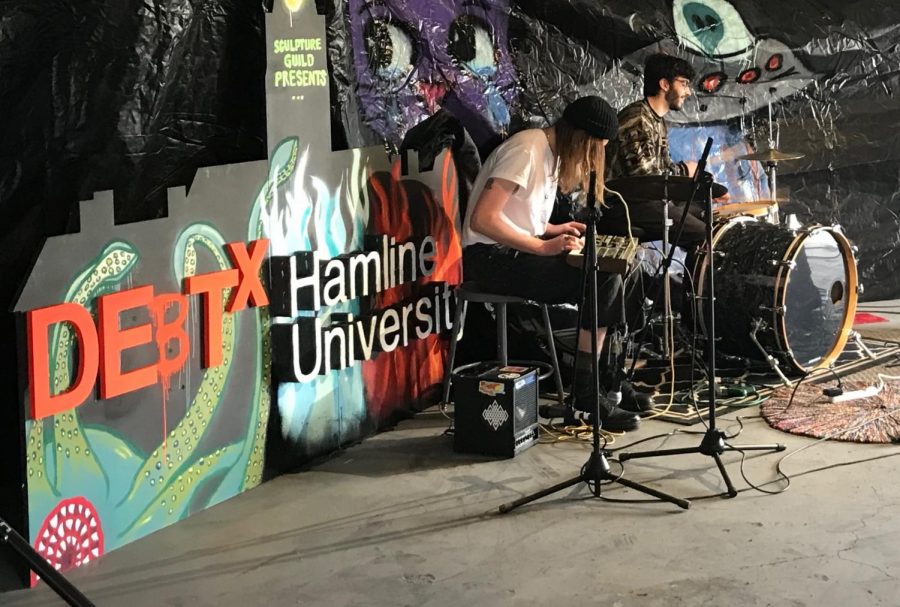 A recycled the TEDx Hamline University sign becomes one of the Sculpture Guild's art installations for the art crawl.

It was a weekend of canvasses, crafts, and rock and roll for the Hamline University Sculpture Guild. Labeled stop 33 in the annual Spring Saint Paul Art Crawl, Hamline’s studios A, B and C played host to art crawlers from April 26 to the 28.

The three studios proudly displayed painting, sculptures and mixed media pieces from the Hamline community, while Studio B was transformed into a small performance venue for eight local rock bands. Besides presenting pieces and supporting artists, students also sold a variety of their own work. This included prints, stickers, pins and t-shirts. Art crawlers could join the fun by participating in a zine, miniature collage-like magazines, creation station set up in Studio C.

While this marked the organization’s second year in the crawl, the Sculpture Guild aimed for this year’s show to be bigger and better than before. The three-day event was the result of months of preparation according to org president, senior Taylor Littlefield. The process began with the organization registering with the Saint Paul Art Crawl in order to ensure a place in the crawl’s directory and promotional literature. The Guild then focused on promoting their want for art pieces.

“This year we had submissions from people who live in and around Saint Paul, instead of just Hamline students. That’s fun, and more of a draw for people,” Littlefield said.

Awareness and accessibility in regards to art is a huge drive for the relatively new Sculpture Guild. “I think [the Sculpture Guild is] trying to build the art department back up again. [Hamline] was once a really well-known institution for metal casting,” Littlefield said.

Due to the limited visibility of art and artists at Hamline, First-year Andi Haus calls the Guild “the most mysterious club on campus.” Haus, who is primarily an illustrator, designed not only many of the event’s advertisement material but also several stickers and pins sold by the Guild.

“We’d like to make the campus more aware of the club, and we’d like to get more art spaces,” said Haus.

According to Littlefield, Hamline’s Fine Arts department lacked a sculpture professor for several years before the recent hire of Assistant Professor Alison Baker. Baker, who serves as the group’s faculty advisor, provided new tools and a refurbished workspace for a new generation of art students. Littlefield credited Baker as the push for students to display their work, as this can be beneficial to life after graduation.

“People who have submitted work can write on their CVs or resumes that they been in a juried a show,” Littlefield explained. Student work is not often shown on campus, outside of the yearly senior art show, and the Sculpture Guild’s Art Crawl show gives non-graduating students experience with curating and installing art pieces. These are skills museums look for when hiring.

The Saint Paul Art Show is supported by the St. Paul Art Collective. The Collective puts on fall and spring art crawl each year and is made possible by grants, donations and volunteers.