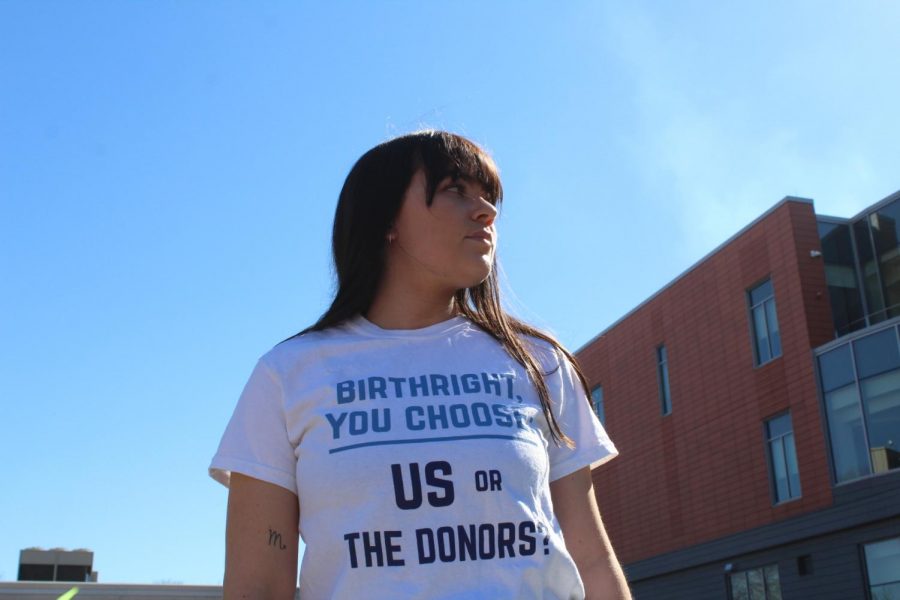 First-year Anna O’Neill has long been interested in the conflict between the Jewish state of Israel, established as an ancestral homeland in the first half of the twentieth century by Jews fleeing persecution in Europe, and the territory of Palestine, historically home to a mostly Arab population. Both entities see the land on which they reside, bordered to the west by the Mediterranean Sea, as rightfully theirs, and Israel occupies the majority-Palestinian West Bank and Gaza Strip regions. Between the groups, tensions and conflicts of human rights abound.

“As a Jewish person, I feel kind of obligated to speak on the issue,” O’Neill said. “I feel like it’s kind of a moral crisis that people are being killed in my name.”

Upon coming to Hamline, O’Neill became involved with Macalester College’s chapter of IfNotNow, which she described as a movement of young American Jews opposed to Israeli occupation in Palestine, that seeks to end support for the occupation within the American Jewish community. A recent target of IfNotNow’s criticism has been Birthright Israel, also known as simply Birthright, a nonprofit which organizes and funds educational trips to Israel for young people of Jewish heritage.

“Birthright tends to target Jewish people who didn’t grow up in Jewish institutions… kind of the most vulnerable group of young Jews,” O’Neill said. “They kind of market it to them as… the pinnacle of your Jewish experience, that you need to go to Israel as like a rite of passage.”

Many IfNotNow members, O’Neill says, have gone on Birthright trips, and felt that they did not offer an unbiased view of the conflict, neglecting to mention Israel’s occupation of Palestine.

“The trips are fun, and they are free, because they are funded by huge right-wing donors,” O’Neill said. “But what doesn’t get shown to the people on these trips is that Israel is occupying Palestinian land, and that Palestinians are living without electricity and running water.”

Because of this discrepancy, IfNotNow began formulating direct action against Birthright, which ultimately culminated at an April 5 protest outside its NYC headquarters. During the demonstration, O’Neill was one of 15 activists arrested for blocking HQ doors.

“Students across the country have been working on campaigns for the past [four] months,” Macalester senior Ari Jahiel, who was also part of the group arrested, said in an email interview. “[IfNotNow] decided collectively that if Birthright didn’t meet our demands to change the maps they use, which don’t demarcate the West Bank… to show us checkpoints from the Palestinian perspective, then we would show up at Birthright headquarters on April 5th. Birthright would have to make a choice — listen to us or choose to side with their donors?”

O’Neill said that the group of 15 were in front of the doors for about 90 minutes prior to their arrest.

“The police showed up maybe an hour into us blocking the doors,” O’Neill said.

Half an hour later, the group was arrested and taken to jail, where they remained for about eight hours.

“The protest was much more impactful and powerful than the arrest. When I got put into the car, I felt like my risk of getting hurt was over,” O’Neill said. “Sitting in the cell for eight hours, it gave me a lot of time to think, was that really worth it? But when I got out, just the praise from the rest of IfNotNow’s members, and all the articles that came out, made me feel like it was worth it.”

“I deeply appreciate [O’Neill’s] commitment to living out her Jewish values in an active and engaged sort of way,” Schwartz said. “It’s painful for me to see the Jewish people divided along such difficult and challenging lines.”

A goal of O’Neill’s is to organize a Hamline chapter of IfNotNow before she graduates.

“I think one of the most Jewish things you can do is to question things, and I think that just because I’m Jewish does not mean that I need to have an unwavering support for Israel,” O’Neill said. “In Judaism a lot of our traditions are rooted in social justice, and it’d be wrong of me to just turn a blind eye.”