“Love and Information” is long-winded

Lighting and sound design are the true stars of this script. 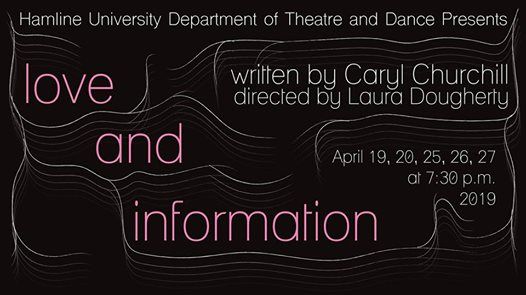 First presented in 2012 at the Royal Court Theatre in London, Caryl Churchill’s “Love and Information” is somewhat of a surreal, experimental modern-day “Our Town.” Like Thornton Wilder’s 1938 American classic, it deals with themes of mundane life and the everyday miscommunications that keep one living in the past instead of in the moment. Unlike it, however, it gives no glimpse into any one place or individual. Instead of Emily Webb and her village of Grover’s Corners, we get more than a hundred unnamed, often genderless characters in brief vignettes. Whether they’re coping with infertility or fighting over a beloved boy band member, the characters can never quite see eye to eye with those with whom they share the stage, nor are their stories ever resolved, for better or for worse.

Director Laura Dougherty acknowledges in her program note that the chief theme of “Love and Information” is that “We don’t get just one story, we get glimpses of over fifty stories” that are not in any way connected, other than by central themes of human discontent in all its various iterations.

Perhaps the play is meant to depict all the ordinary and non-newsworthy yet meaningful events that take place independent of one another in a single day. Wikipedia also states that while the play’s seven sections are to be presented in a certain order, the vignettes within each section come with no fixed arrangement. The way they were sequenced in Anne Simley is no more or less valid than the original organization in their debut across the pond, meaning a crucial part of the experience of putting on this play is deciding the best way for the scenes to flow together, and in a sense, being able to create one’s own story out of the puzzle pieces.

That said, the transitory nature of the script and the lack of assigning names to the characters made it difficult to keep track of who was playing whom. Actors were simply listed in the program by name, without so much as a side note about how many characters they each were depicting. In spite of standout scenes in which characters fall in passionate, erotic love with a computer game or contend with all the weirdness that comes with learning your mom is actually your grandma, there were too many that dealt with run-of-the-mill relationship problems, most of which blurred together in my mind without so much as a major costume change to distinguish them.

As with the costuming, set design was understandably minimal, but the quality of the lighting and sound effects more than made up for it. In the first act’s opening moments, a light-colored platform was moved onto the stage without so much as a sound or the shadowy figures of stagehands, leaving me perplexed as to whether it was real or simply an illusion of the light until the house brightened and I realized that it did, in fact, exist. Background music complemented the lines being acted out on stage without distracting too much from the actors’ words, the sounds being amplified throughout the house so expertly that if you didn’t know better, they could be mistaken for an untimely ringtone coming from the cell phone of the person sitting next to you. Most ethereal was the creation of a starry night sky, with a complementing soundtrack that couldn’t help but ignite feelings of smallness in the audience.

If you’re in the mood for a play that does not quite feel like one, upcoming performances of “Love and Information” are held in the Anne Simley Theatre on April 25, 26 and 27 at 7:30 p.m.