The Walker Art Center is making use of free Thursday admission to present a current immigration performance art series. 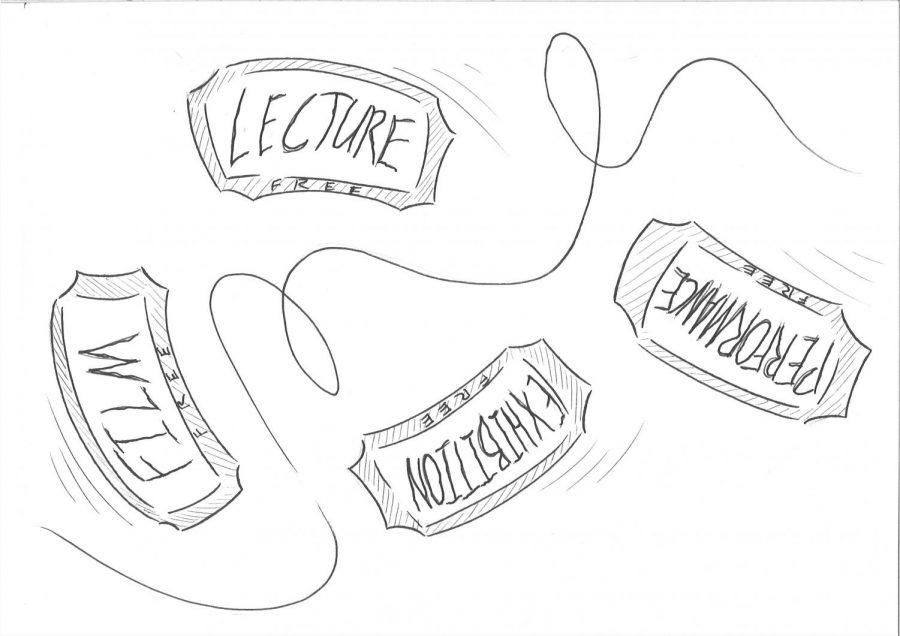 Bored on a Thursday? Why not head to Free Thursdays at the Walker Art Center in Minneapolis? With sponsorship from Target, gallery admission is free from 5 to 9 p.m. every Thursday night. In addition to the six current exhibitions on display, Free Thursdays also provide unique events, performances and screenings to museum attendees. While past events have included classes or talks with artists, the Walker challenged hearts and minds on April 4 with its third iteration of Filling the Void.

Inspired by Carey Young’s Declared Void II (2013), local artists had 10 minutes to perform pieces addressing issues of immigration, citizenship and nationalism. Located in the “I am you, you are too” exhibition, Young’s piece consists of black vinyl text and vinyl strips that section off a corner of the galley. This creates an open performing space. The text declares, “by standing in the zone created by this drawing, and for the period you remain there, you declare and agree that you are a citizen of the United States of America.”

This is the void three artists worked to fill. Museum-goers sat and stood in the gallery, listening as Jonathan Herrera Soto began the night of performances with the poem “Con Amor y en Solidaridad Siempre.” The poem, utilizing both Spanish and English, was devoted to those who live in the borderlands outside of Young’s void.

As the claps died down for Herrera Soto’s performance, members of the audience arose to pass out pink envelopes. These envelopes contained letters written by non-citizens of the United States. As the audience began to open the letters, couples, consisting of a non-United States citizen and a U.S. citizen, entered Declared Void II. The piece, called “A Long Hug,” was devised by Peng Wu. Diverse in ethnicity and age, the couples stood hugging for 10 minutes.

“I’m hugging Jared Tuttle today,” Eason Wu wrote in his letter. Wu is a Beijing-based graphic designer who self-identifies as a non-U.S. citizen. Wu considers his former roommate Tuttle one of his best friends and ends his letter quoting the documentary “Dear Zachary: A Letter to a Son About His Father.”

“The main thing, I guess, about being an only child is that I get to choose my brothers,” Wu wrote, saying this quote is what he longs to say to Tuttle and his other American friends.

The final piece, entitled “Immigration Laws and How To Use Them,” was created by Pedram Baldari and Nooshin Hakim. The piece involved performers making paper airplanes of torn book pages while the first immigration law, the 1790 First Citizenship Act, was read aloud. The performer repeated certain lines in a sing-songy voice to mock the absurdity in the implications of a law written over 200 years ago. This included “being a free white person” and “proof to the satisfaction of such Court that he is a person of good character.” The piece ended with the speaker reciting a list of countries referenced in Executive Order 13769, commonly referred to as Trump’s Muslim ban.